It was good to visit a wargames show again today.  I understand that Salute won't return to its usual April slot until 2023, and I wonder if the November date affected the attendance and numbers of games and traders who were there.  It did feel down on those compared to Salutes of the past.  The Excel hall seemed more cavernous this time, with large open, unfilled areas - I don't know whether that was due to continuing social distancing requirements or because some games and traders had dropped out (I heard that 3 traders cancelled at the last minute).  A couple of the people I spoke to who were hosting games drew attention to the costs of Covid-tests and increased hotel prices, and I think those of us who attended the show should perhaps appreciate more than usual the effort that the clubs put into attending Salute and giving us games to enjoy.

This year I had both the boys in tow - Hugo's third trip and Monty's first.  We arrived just after 11am, early enough to receive bags with the free figure of a 1940s boy playing with a toy Spitfire (life-size models of which were in the hall).  We had lunch at midday, returned to the hall just after 1pm, and within 5 minutes Hugo was complaining of not feeling well and we'd left by 2pm.  So it was a pretty short trip, which explains the lack of photos.  That said, the show did feel quite "game-lite" - there were some stunners, as the photos show, but otherwise I thought the games were mainly very small, skirmish-type ones (often plugging particular systems and ranges).  Looking through the show guide, it looks as if a few games were no-shows or otherwise cancelled.  All that said, looking through the photos I took I see that all the major game types were well-represented and the show gave a good idea of where wargaming is at these days.

As for shopping, my main intended purchase was a total non-starter as Dave Thomas's Perry Miniatures stock didn't have any Carlist or Paraguayan Wars figures.  So tonight I'll have to put in an order at PM for the figures I need to finish various units I've been working on recently.  But I was pleased with various jungle terrain items from a new trader whose name I can't recall, some lakes from Kallistra and some more Last Valley trees - all to be seen in some Paraguayan action soon.

And so to the games.  As always, apologies to those I missed (which this year were many).

The Warlords had "Wellington in India", using figures from Stuart Asquith's collection.  This was very much "In the Grand Manner" and one of the best-looking games in the show, I thought.  It also made me wonder why the period isn't covered by more figure ranges (yes, Alan Perry, I mean you):

Some of the "advert" games next.  I liked the "Blood Red Skies" Pacific games, not least because I'm trying to get the boys interested in this "it's like X-Wing but in World War II":

The people who do "The Drowned Earth" skirmish game always have some fantastic terrain:

I've no idea what this was, but the terrain was very good:

Monty was very drawn to the "World of Twilight" game and display; wonderful and imaginative sculpts that were beautifully painted - but pretty pricey, to be honest:

Loughton Strike Force had a 15mm "Stalingrad" game.  The table was very high, and I suspect there was some "underground" action going on at the far end of the table.  I meant to go back later to investigate, but sadly didn't.  But the terrain was stupendous:

Grimsby Wargames Club had another good-looking WW2 game, this time in 10mm.  There was even a "working" cinema for the wounded, which played real news-reel footage:

I didn't catch the people behind this recreation of the "Band of Brothers" Brecourt Manor attack, and they aren't listed in the show guide.  The terrain was very good and the large trees really gave a sense of place and a proper dimension to the confined gaming space:

There were two 25mm pirate games, and I'm not entirely sure which was which.  This may have been the Leicester Phat Cats "On the Plains of Panama" game:

I think this was Hornchurch Wargames Club's "Black Sails" game - a massive table and pirates galore:

Caseshot Publishing had a 15mm "Wellington at Bay 1812" game, of the Battle of Villamuriel on 25 October:

Wyre Forest Wargames has a massive 6mm Battle of Poltava: 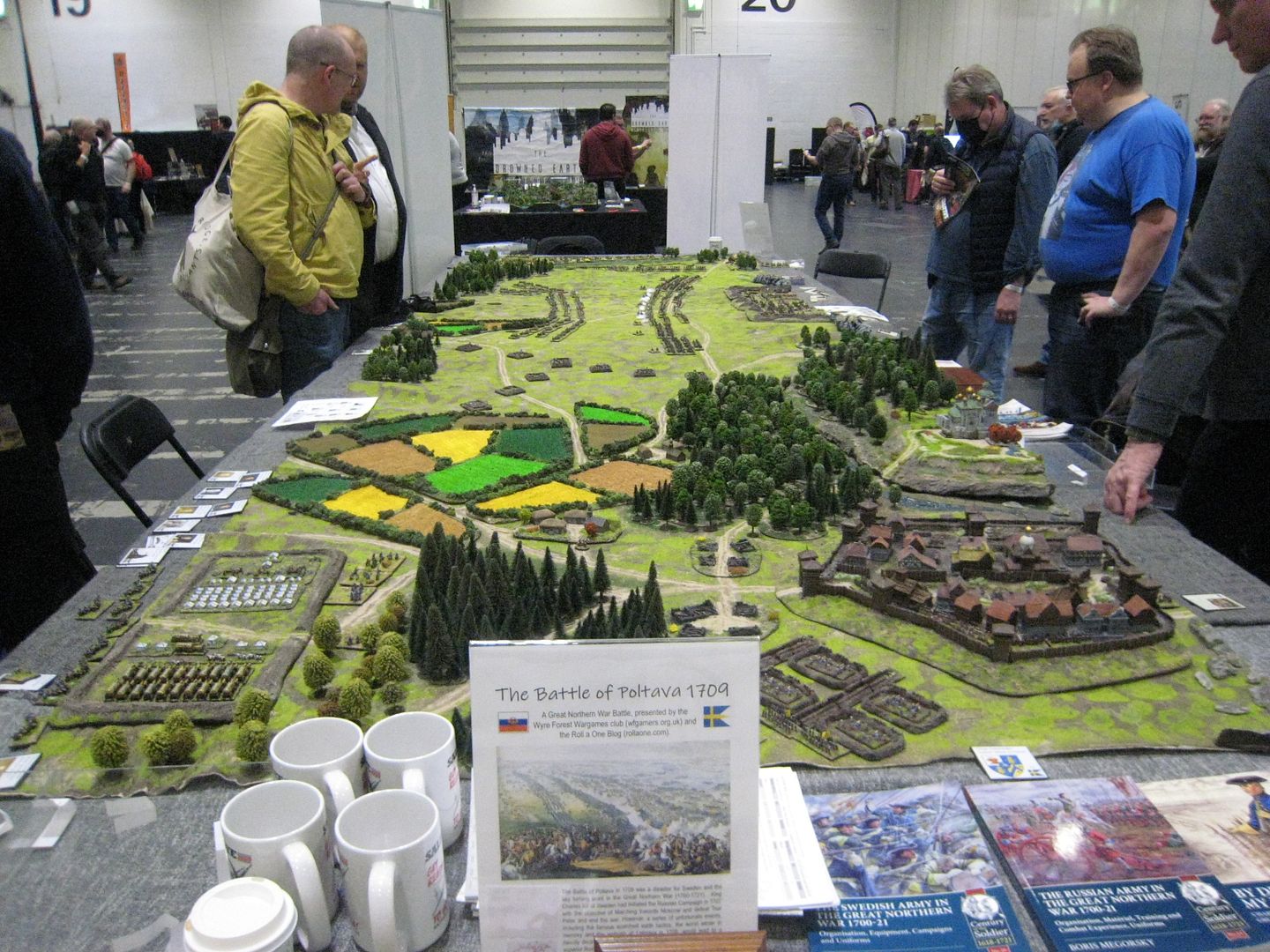 Finally, I think this was "Panzer Lehr Counter Attack, 1944" by Anschluss Wargames:

Accepting that some had clearly cried off at short notice, I thought the games were a huge disappointment. Salute is rightly famous for superb display games but today was underwhelming, particularly compared to Partizan last month. An enjoyable day out but not one to linger in the memory.

Thank you for sharing your pictures. Many lovely looking games there. By the way, I wonder why so many wargamers always blame Alan for lack of particular representation of figures or whole ranges representing some conflicts (I was moaning to Alan whole Great Waterloo game about proper looking elite Duchy of Warsaw Uhlans...). Any idea?

Thanks for doing this nice report, its good to see the show is back up and running, though I imagine it will be a while before things on the show circuit start returning to 'normal'.

Great report - you mention that the show will not return to April until 2023 - this is new news to me - is that written down somewhere ?

There's a clip on YouTube from yesterday where a member of the Warlords says it's all booked for April (9th from memory?) next year.

I have to agree. None of the games I had hoped to see were there. Usually Salute games are an inspiration...!

Glad to see that you and the boys got to the show Giles. I was not tempted, after The Other Partizan I'm keeping away from crowded shows until next Spring.

Giles thank you for the lovely comments about my Wellington in India game , they were much appreciated.
As far as I an aware Salute is back in April 2022. I think the logistics and sheer cost of coming into London are increasingly putting people off, putting on games , not only is it the higher petrol costs but also the cost of parking and overnight stay in even a small local hotel are prohibitive.. I was PARTIZAN earlier in the year , hotels are a third of the price , free parking make a big difference . The really superb games that Ian Smith and Bill Gaskin have put on at Salute in the past require a number of helpers and for many understandably this cost is prohibitive . Whilst there were few great games there was some real little gems at the show that are easy to overlook.