This is the Napoleon in Egypt personality set from Brigade Games.  Perry Miniatures don't have a Napoleon figure in their Egypt range, presumably because the range is more orientated towards the British intervention after Napoleon's departure in August 1799.  Before Christmas I put in an order with Brigade Games to take advantage of a sale and to buy some of their new(ish) AWI figures, and I couldn't resist this set and a couple of other Egyptian campaign things.  I was going to blog next about my recent ACW units but thought I'd just finish off these French bits first.  This is my second attempt at Napoleon, after the rather massive piece I did for a Salute Waterloo game many years ago (see here).  I won't both with any sort of potted biography of Napoleon, even one limited to the Egyptian campaign, but rather will post some observations on the paints and colours I used, in case of interest, and some inspiration.

Back in 1799 Napoleon was 30, trimmer and fitter than at Waterloo.  His Egyptian adventure captured the imagination of French artists, and Jean-Léon Gérôme painted three depictions of Napoleon in Egypt which show a young man who is quite different to the corpulent Emperor of several years later.  Gérôme painted a number of middle eastern scenes and had travelled in the region in the 1850s.  His three best known Napoleon paintings are below.  These are very atmospheric paintings, a long way from heroic battle scenes like the work of Horace Vernet, for example.  Commentators have noted how these paintings are quite psychological, with Napoleon seeming deep in thought or contemplating some aspect of his destiny (there's a good analysis of the second painting here).  I found these quite inspirational.

Napoleon and his General Staff in Egypt, late 1860s

Bonaparte Before the Sphinx, 1886

I had to re-find the paints I'd used for the Dromedary Corps vignette.  The base coat was Citadel XV-88, then various layers/touches of Tau Light Ochre, Bestigor Flesh, Ushabi Bone and Foundry "Base Sand" and "Boneyard" paints.  I had to look up the colour of Napoleon's hair, which apparently was dark brown (I had thought it was black).

Uniform information was sourced from the Osprey MAA and the first volume of Charles Grant's "Napoleon's Egyptian Campaign".  Those books suggested that the uniforms of the high command were often adapted at the whim of their wearers, particularly the hat plumage.  The chap with the telescope is supposed to be a general de brigade (hence the light blue sash) and the mounted figure is a general de division (hence the red sash and plumage).  I tried to paint as much decoration on the camels' saddle cloths as I could without over-cluttering.  The cloths on Napoleon's saddle are sculpted such that there's a lot more cloth on the left of the figure than the right, so the pattern looks a bit uneven.  I wasn't entirely sure what sort of animal the skin on the horse was supposed to be, but a leopard looked appropriate.  I had originally intended to place a few bricks and perhaps a bottle cork at the back of the base to suggest some ruins, but decided that would look too busy.  So I'm sure more could be done with this set to jazz it up, but I'm pleased with how it came out and it didn't take long to do. 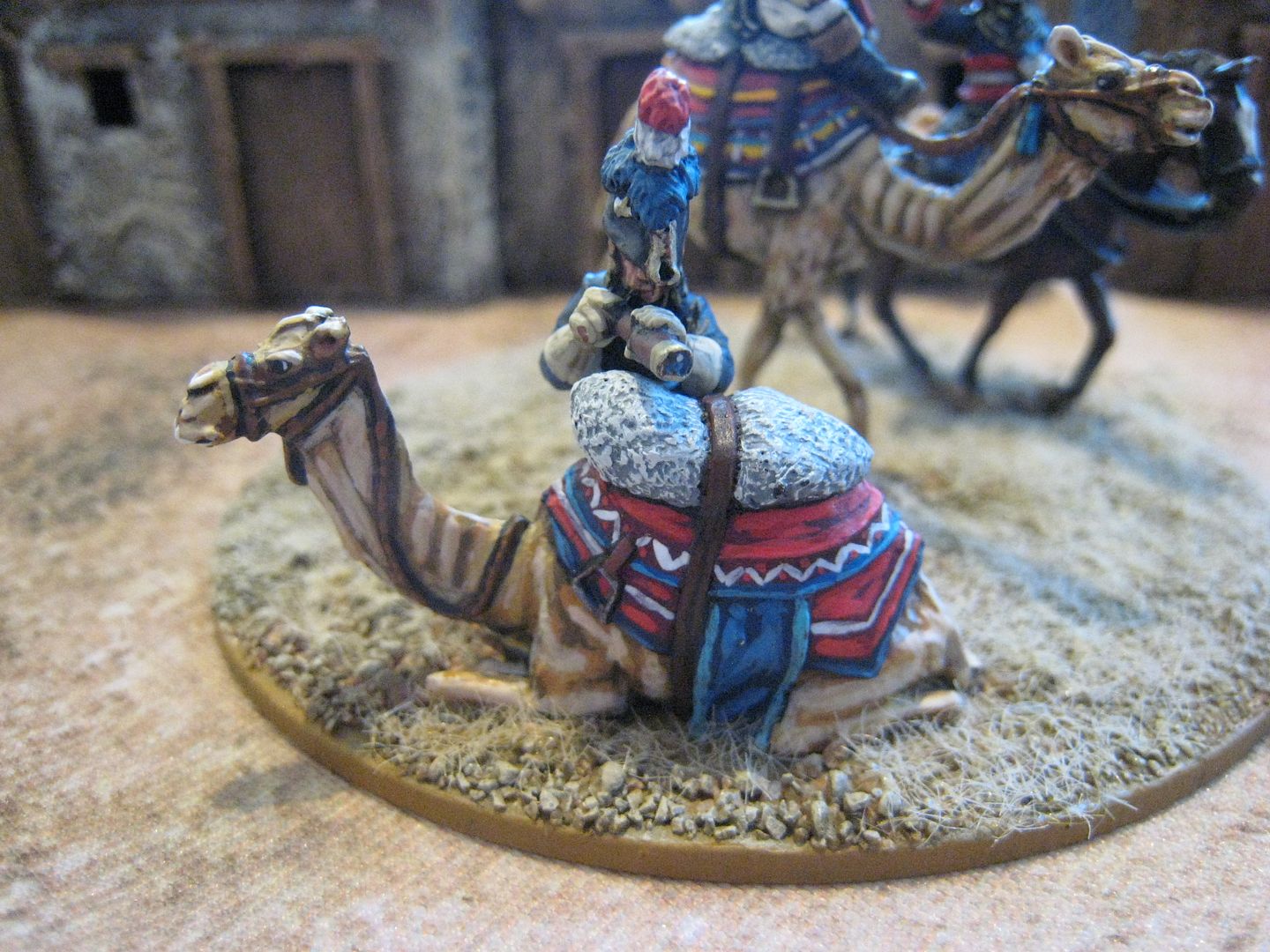 As a coda to my current batch of Napoleonic French, this is the Perry pack of sitting camels and guard from the Régiment des Dromedaires, the camel-mounted unit created for service in the Egyptian campaign.  This was quite small, being two squadrons each of about 250 soldiers, and fought as mounted infantry.  Perry Miniatures have mounted and dismounted figures, and Brigade Games have some nice models as well.  This set is clearly the equivalent of a cavalry horse-holder.  Two camels doesn't really cut it if you have a unit of 12 figures on the table, and I did think about whether I should buy a second set and make a larger base; but in the end I just went for this "as is", given it is likely to be a while before I paint more of the Dromedary Corps.

This set had lain half-finished on my painting for the best part of 2 years, and I finally finished it off at the beginning of the Covid lockdown.  I really wish I could remember what paints I used for the camels; it was a number of Citadel paint mainly, I think, with some Foundry highlights.  I really need to write things like this down in a notebook.  I owe thanks to wargaming and wine-loving chum John Baxter in Melbourne who emailed me an excellent article (in French) about the regiment and its uniforms a while back.