Having failed to post about Salute 2018, here's a summary of this year's show.  It was the second time I'd taken Hugo - one's experience and view of a show like this changes a lot with a little one in two.  As with last year, I spent much more time looking at the sci-fi/fantasy stuff and less time shopping.  Hugo seemed a bit overawed by the scale and size of it - even after a 30 minute coke (the drink) and chips break he seemed to tire quickly, although he perked up when we found an X-Wing game and then, even better, a participation Warhammer 40K game.  The latter at least gave me and mate Malcolm (who'd come over from Spain) 20 minutes to potter around kid-free.  When we left at 3pm Hugo announced that he'd loved every minute of it, despite moaning for at least an hour previously that he wanted to go home - that's kids for you.

My overall impressions are below.  These are simply my own views and I'm not trying to be controversial for controversy's own sake.  As I say each year, I have nothing but respect and thanks for the Warlords and everyone who turns up with a game, and I appreciate the hard work that goes into them.

- It was the year of the terrain mat and the mousemat dice tray.  Many of the games were played on the former and it felt like every game had at least one of the latter.  [As the owner now of a fairly large collection of mats, from a variety of sources, I can attest to their excellence; one key advantage is easy customization of design.]

- It felt like the show was devoid of large-scale, grand-manner historical games.  A group of them suddenly appeared at the far end of the hall, but there seemed fewer than usual (and by a long way).  I couldn't see any ACW, which was a first.

- The show now seems dominated by high-concept 25mm (or above) skirmish games, largely sci-fi/fantasy but with more historical games going this route.
- You'd think the market would be saturated by said high-concept sci-fi/fantasy skirmish games, but new ones keep coming out.  There were a large number of trader/advert/demo games of this sort and now pretty much every tv and film franchise seems to have it's own "board-game with miniatures" system.


- The impression I had overall on the games is that it's hard not to conclude that historical wargaming is stagnating somewhat - sure, there were still very impressive games, but by-and-large they don't really look any different to the games I saw 10-20 years ago.  It's the sci-fi and fantasy games that are always innovating (often in hand with ever more elaborate mdf terrain).  Of course, this may well be inevitable: one can't "innovate" with historical battles, as they are what they are and, for example, one large ECW game will always look much like another.  New figure lines won't deviate from what historical soldiers looked like, and so historical games from the same period will always look a bit samey for that reason too.  That said, I thought the Tonkin game set new standards in terrain design and there were others (see below) that also had excellent terrain.
- I couldn't see various traders that you'd expect at a show like this - no Dave Thomas for second year running, and I couldn't see Front Rank and a few other historical "big beasts".
- I know taking credit cards is not as easy as shoppers think and, yes, there are cash-points at Excel, but this is 2019 and it's not helpful for traders to only take cash.  My emergency cash float was wiped out by the second trader I visited and Malc had to bail me out.

- Once you start shopping for sci-fi/fantasy stuff you begin to appreciate just how many traders there are selling products for this market; and some of their products are amazing.

- Wayland Games and other emporiums: you need more aisle space in your shop areas.  I literally got stuck a couple of times, the first time with a bloke with a truly enormous rucksack (on his back) who wouldn't stop trying to push his way past me even though he was at risk of knocking over an entire shelf of products (and, frankly, people who don't take their rucksacks off in the shopping areas should be asked to leave, IMHO).

- A special thanks to: (i) Sons of Simon de Montfort for their Warhammer 40K game and looking after Hugo so well; and (ii) Mantic Games for their "lucky dip", which saw Hugo come away with a free Hellboy figure.

Shopping?  A Harry Potter Miniatures Game pack of figures for Hugo and some GW Necrons for Monty; Frostgrave stuff from North Star; resin terrain from Ainsty, Coritani and [ ].  This was the first time I've ever been to a show and bought neither historical figures nor books (although I did pick up a set of Warlord plastic Napoleonic Hanoverians free with a WI voucher).

Here are the photos, with the standard apology to those I inadvertently missed out.

Romans v Boudicca courtesy of "To the Strongest": 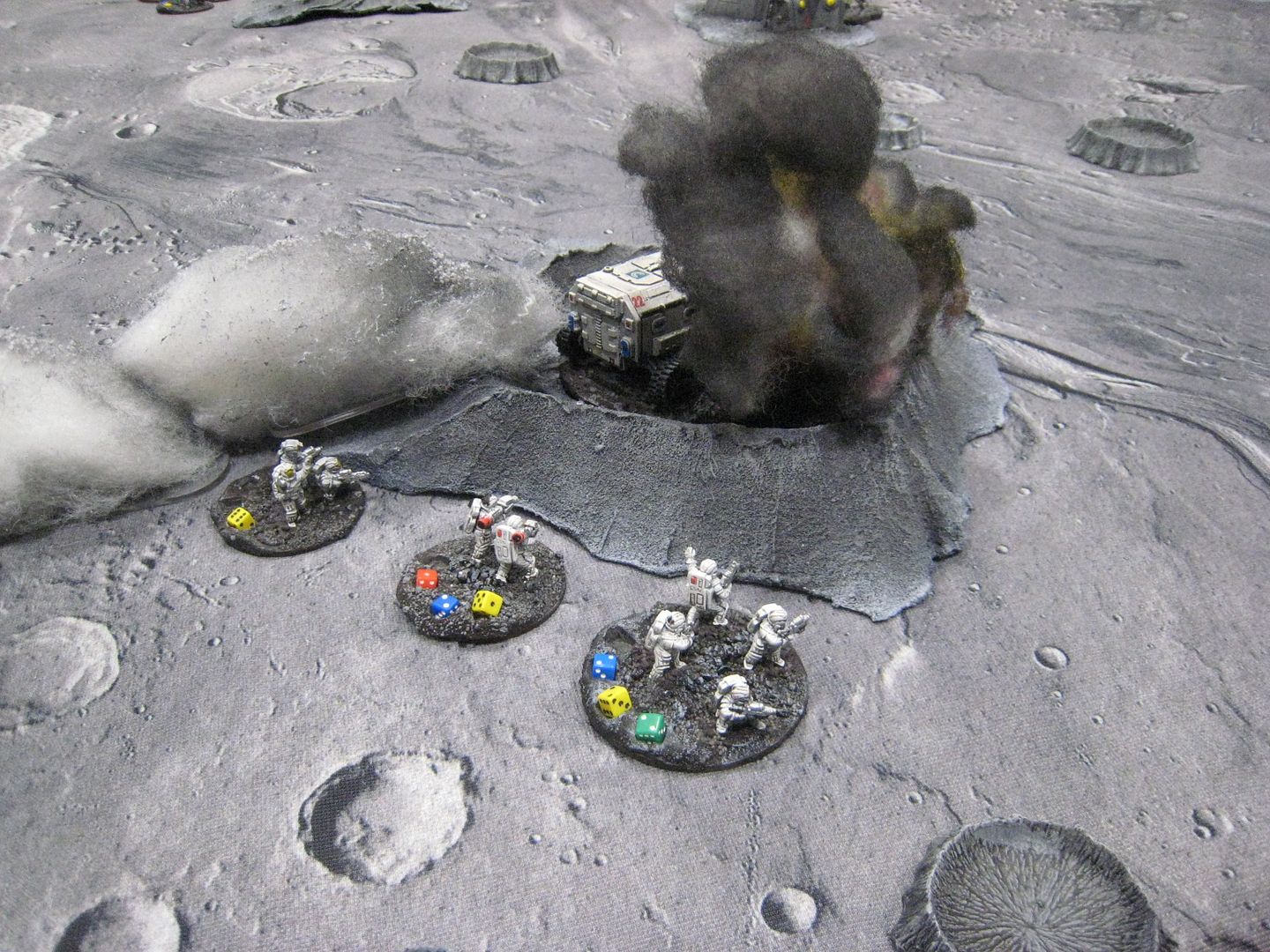 A "Back to the Future" game from Bexley Reapers; there were light shows, apparently (I saw the lightnight strike a couple of times): 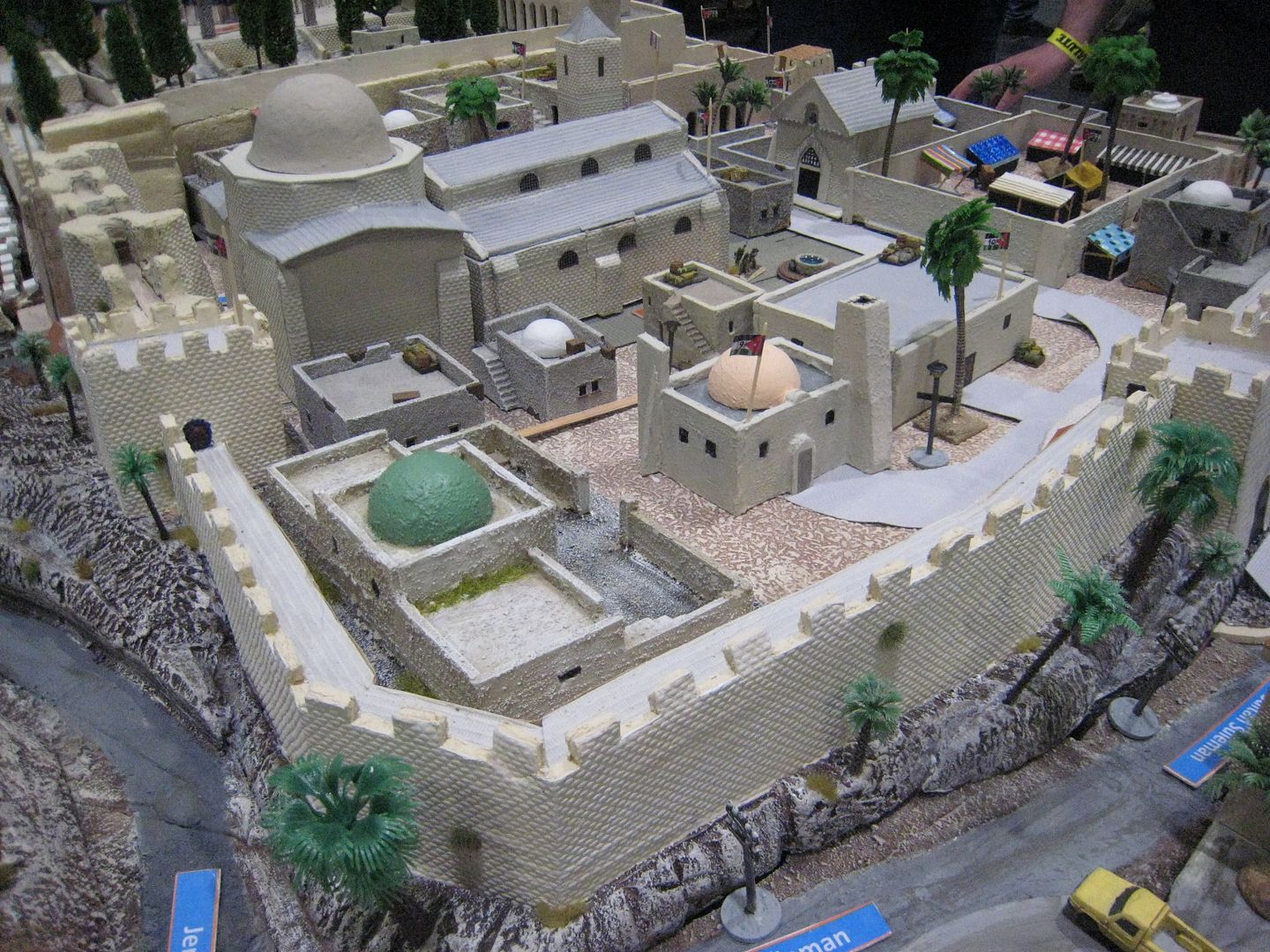 This was an interesting one.  Some chaps from the University of Edinburgh had built a replica model of a Crusader castle (or bits of it) and ran a skirmish game through the various floors of the keep:

Outstanding terrain and scenics on this Ancient Greeks skirmish game:

Hugo admires the Lego Flash Gordon set-up from the Jersey Privateers; this was pretty amazing and won "best in show", I think: 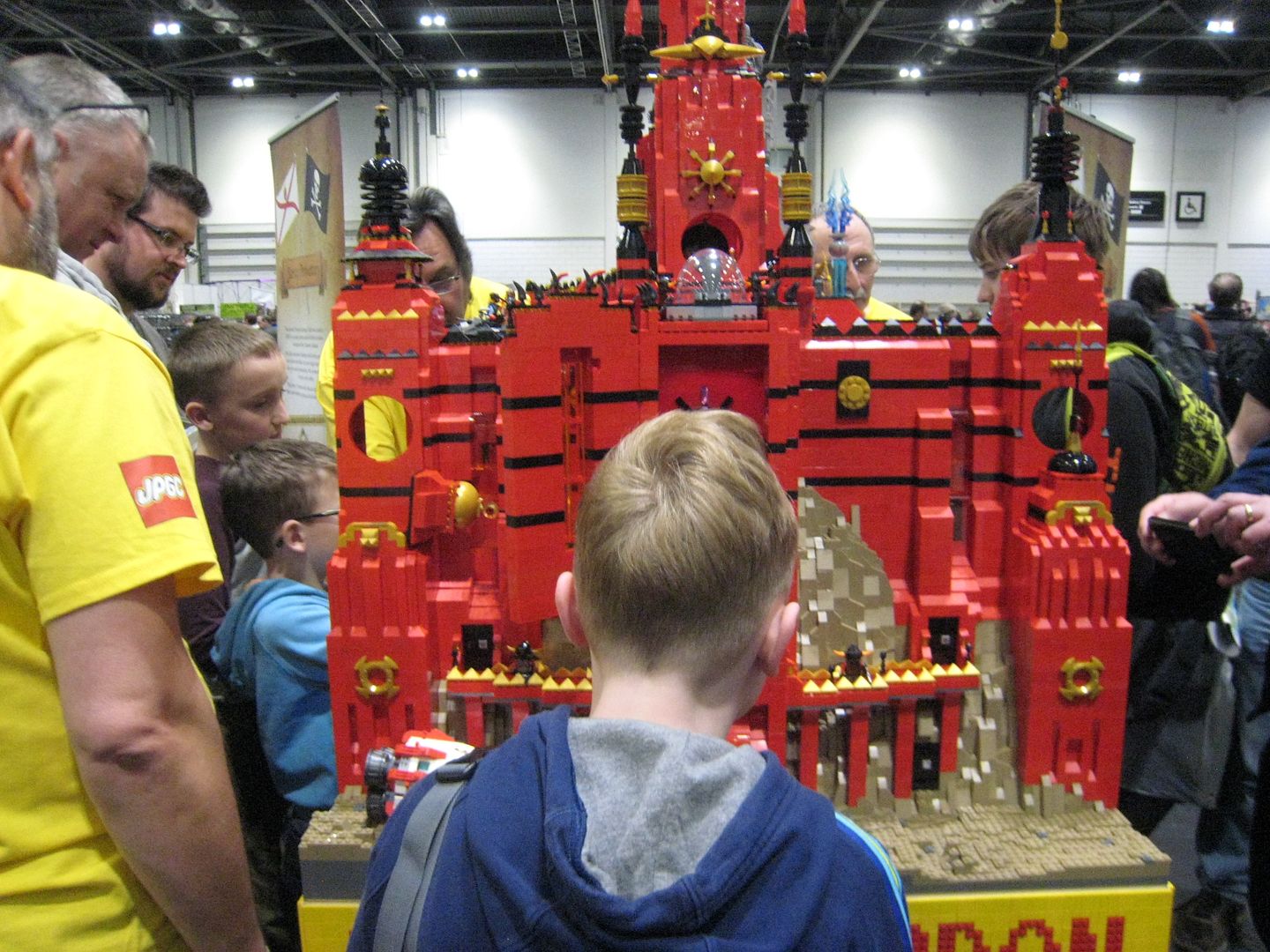 Another  fun-looking Apocalypse/zombie/anything you like skirmish game, with impressive scenery: 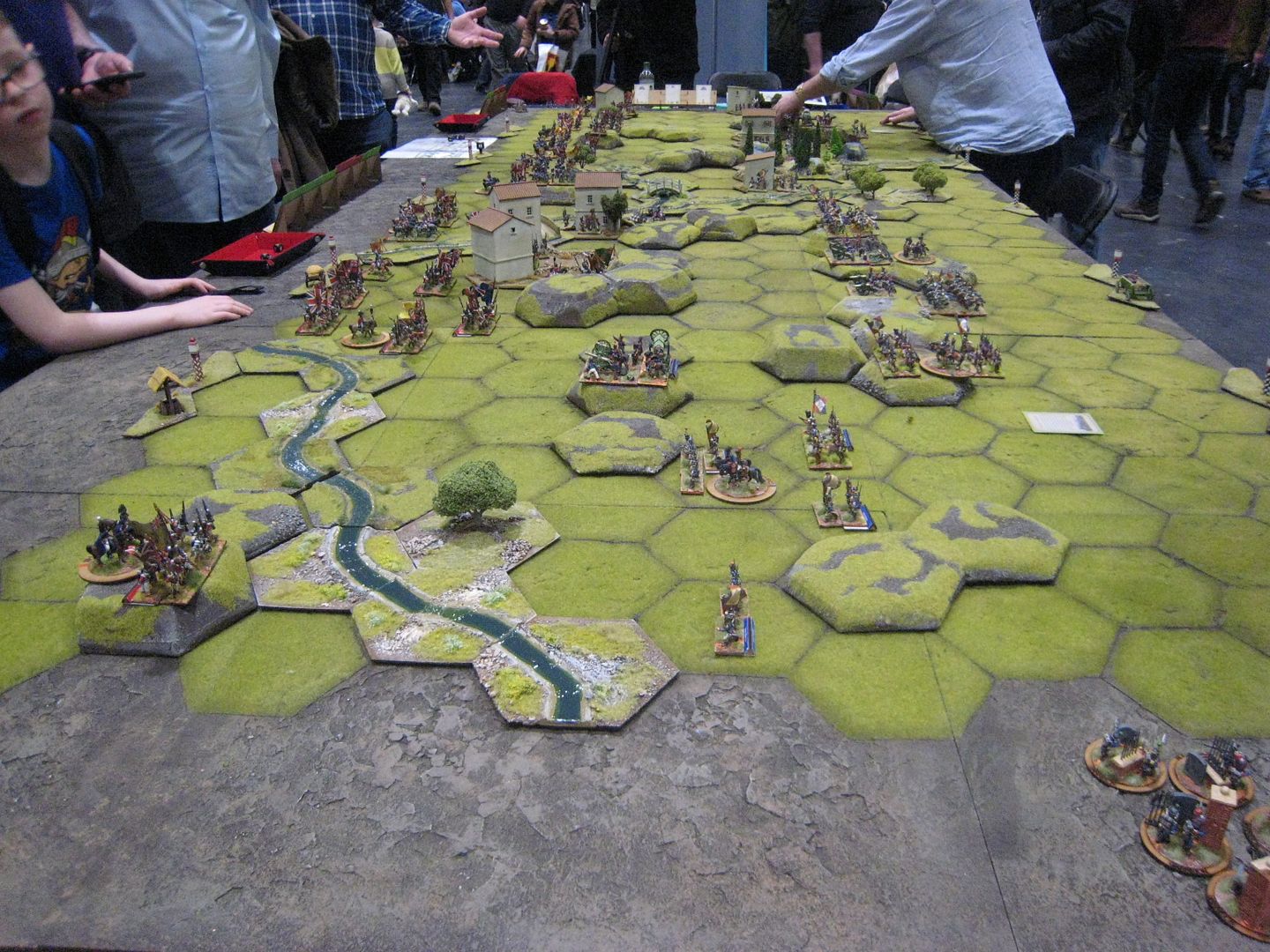 The Too Fat Lardies' superb WW2 in the far east game:

This was a "what-if" Battle of Rossbach from Raphael Fonseca and friends:

…..before joining his very first Salute participation game, as commander of a squad of Space Marines in 40K:

The Tonkin game from Gringo40s was superb - my personal favourite:

"Batman: The Miniatures Game" had an outing thanks to Thor's Hammer Gaming Club: 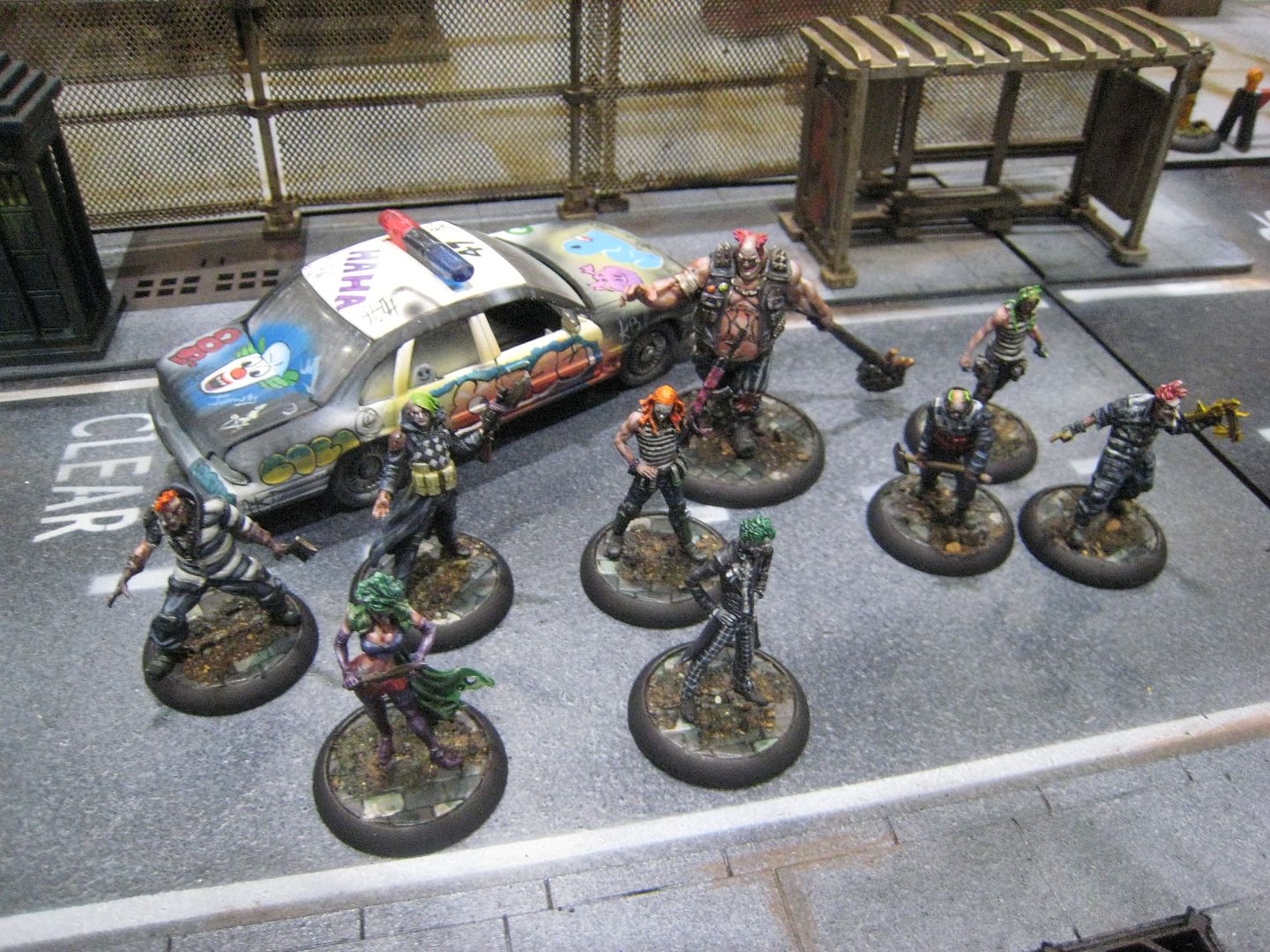 More W40K action, not sure by whom; seemed to be "blue on blue" Salamanders v Ultramarines:

Loughton Strike Force had one of their Napoleonic slug-fests, "Ligny 1815":

Was this "Dead Man's Hand"?  Not sure, but the Western town set-up was ace:

Maidstone Wargames Society alighted on the "100 hour War" of 1969 between El Salvador and Honduras; again, superb terrain that had a real "this isn't Europe" feel to it: 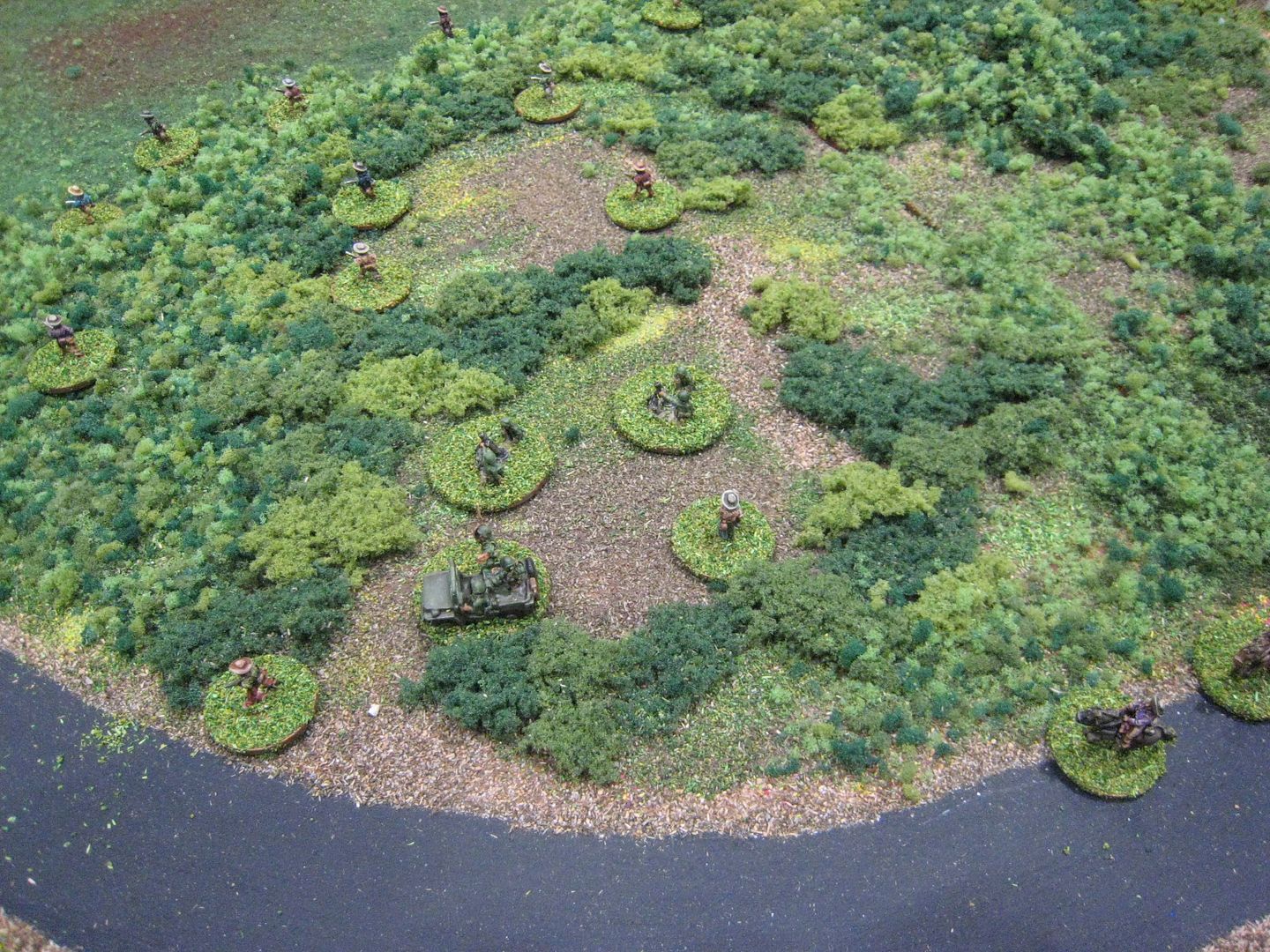 The Battle of Lutzen 1632 from Friends of General Haig; classic "grand manner" historical gaming and another personal favourite; also, a rare example in this show of the "teddy-fur" terrain of yore: 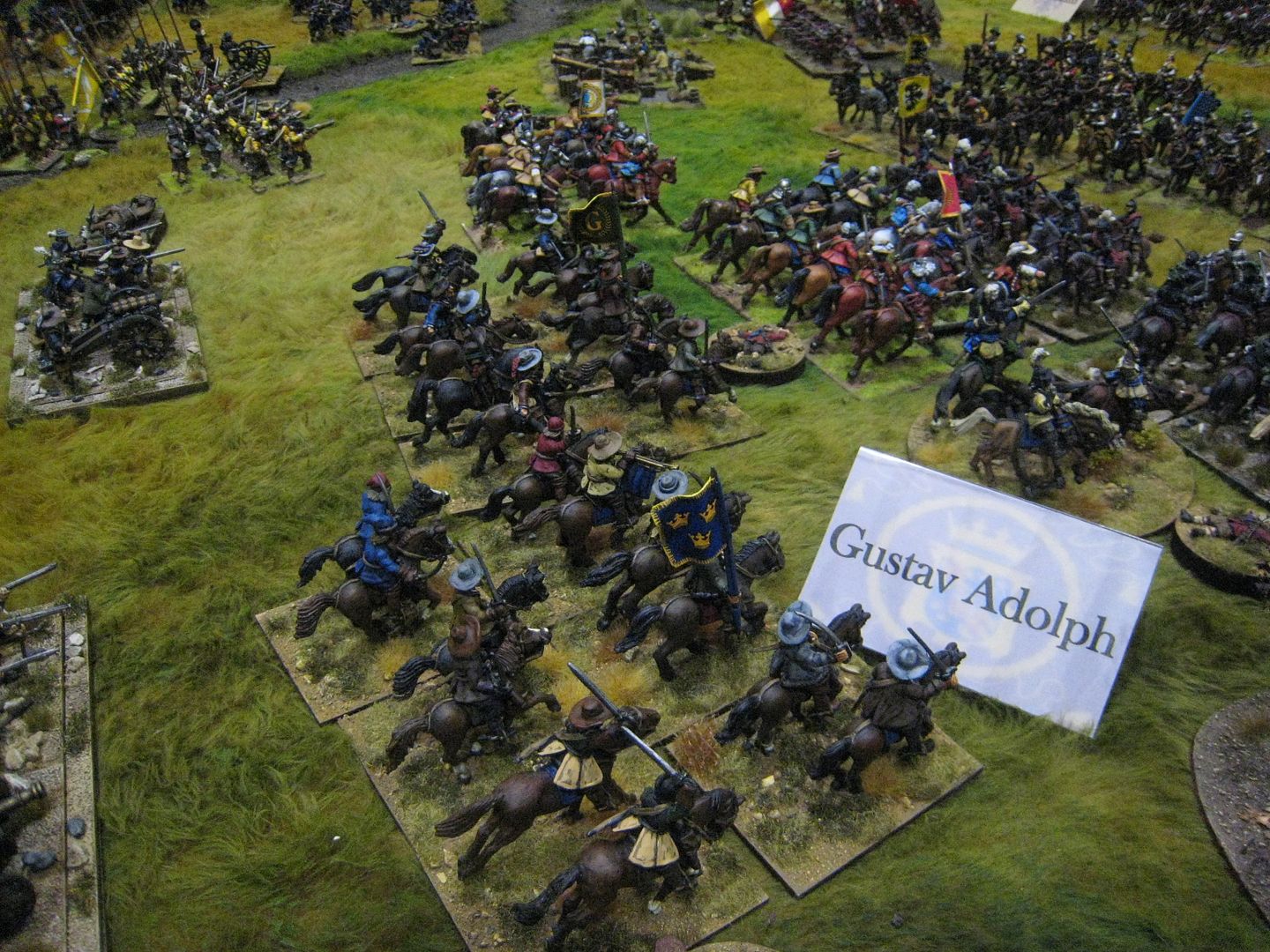 A sci-fi/fantasy skirmish game; not sure what, I'm afraid: 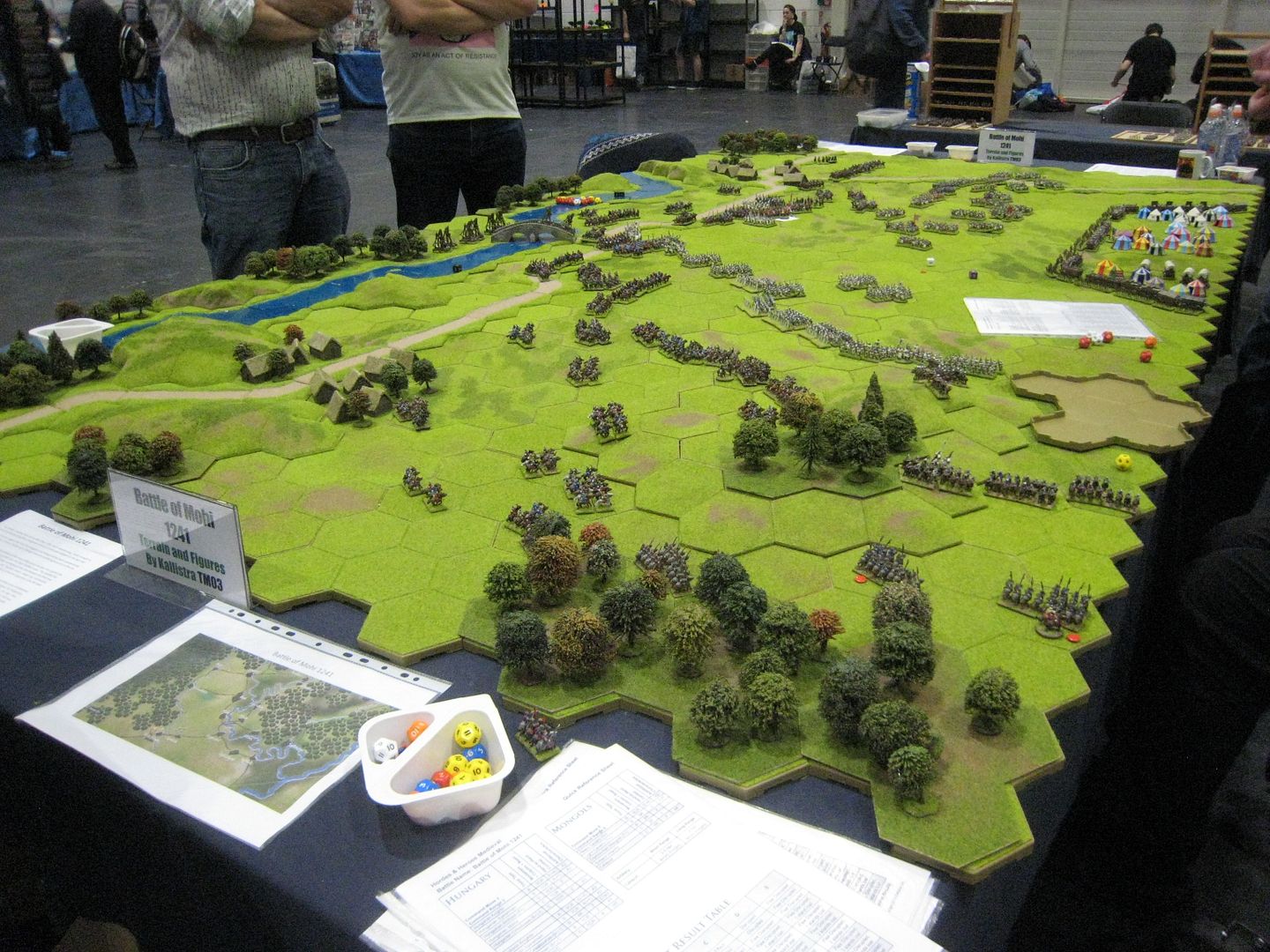 Finally, Simon Chick's typically sublime Battle of Bauge 1421; sculpted terrain and painted figures don't come much better than this (I said to Malc that there's almost a Perry/Chick "house style" which is immediately recognisable): 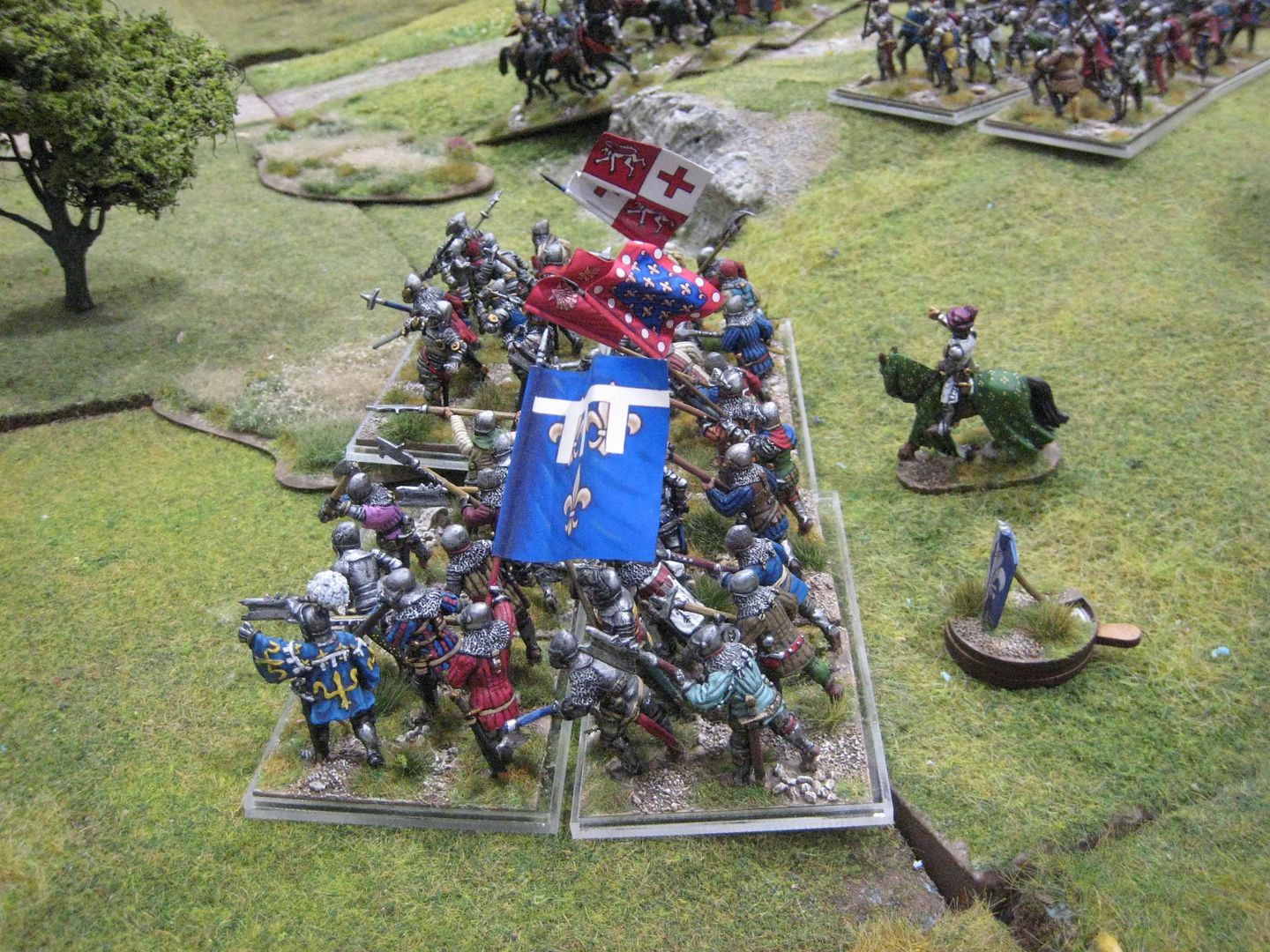