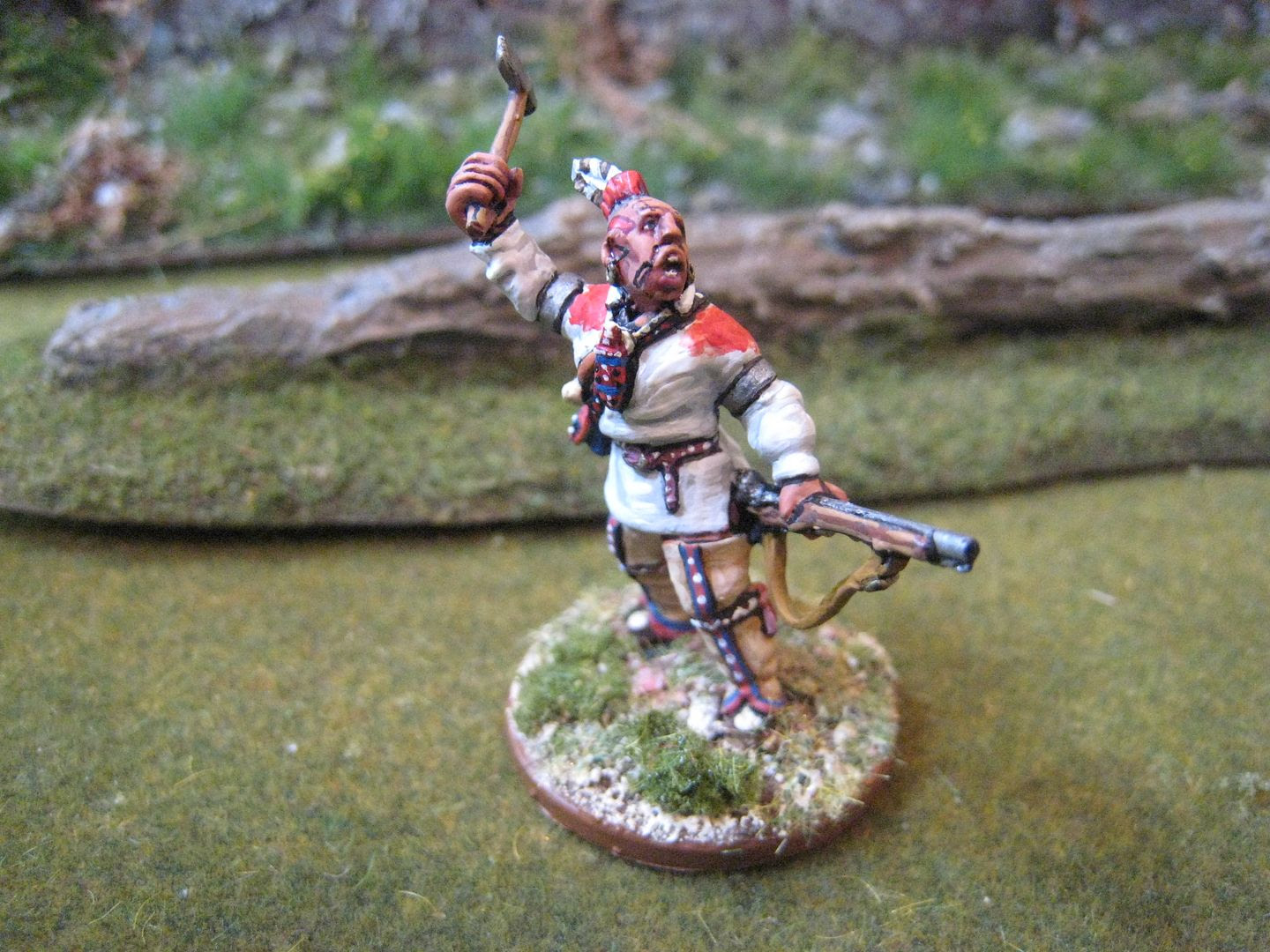 Hanyery (or Han Yerry) Tewahangarahken (c. 1724-1794) was a warrior of the Oneida tribe who fought on the Patriot side at the battle of Oriskany in August 1777.  I gather his name means "He Who Takes Up the Snow Shoe" and he was the son of a German father and a Mohawk mother.  The Oneidas were one of the founding tribes of the Iroquois Confederacy and lived in what is now central New York state.  When war broke out in 1775 the Iroquois were initially neutral but the tribes eventually had to choose sides and whilst most remained loyal to the Crown the Oneida sided with the Patriots.  The Oneida acted as scouts and around 50-60 warriors, including Hanyery, fought with Brigadier-General Herkimer's militia force at Oriskany.  By this time Hanyery was a prominent member of his local community and a prosperous farmer.  At the battle Hanyery was accompanied by his wife Tyonajanegen (meaning "Two Kettles Together") and his son Cornelius.  The story goes that Hanyery was hit in the wrist by a musket ball and Tyonajanegen helped him reload his rifle.  In a contemporary article about the battle in the "Pennsylvania Journal and Weekly Advertiser", Hanyery is reported as having killed nine of the enemy (being a mixed force of Loyalists and other Iroquois) and Cornelius two.  Tyonajanegen survived the battle as well and rode off to tell local people the outcome of the battle.   Hanyery and Tyonajanegen continued to serve with Patriot forces during the Saratoga campaign.  General Gates apparently arranged for three gallons of rum to be sent to them and their family as a reward for their services.  It seems that at some time during or after the campaign Hanyery's house and farm were destroyed by pro-British forces. 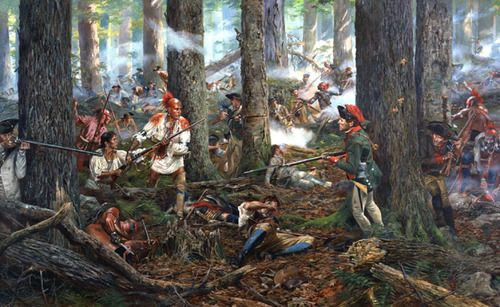 This figure is from Galloping Major that I acquired when I bought all their F&IW militia packs (which I turned into a unit of Loyalists).  The figure is sold separately as a "heroic Mohawk warrior".  I painted it at the same time as some Conquest Miniatures Iroquois.  The GM figure is noticeably taller and stockier than these other figures and so I thought about how I might use the figure by itself, perhaps as a personality.  I had been looking at Don Troiani's wonderfully atmospheric painting of the battle of Oriskany (see right) and I realised that the GM figure looked just like Hanyery in that painting (prior to his injury).  The "British Grenadier!" orbat for Oriskany lists 6 Oneidas as part of one of the Patriot brigades.  No leader of this band is mentioned, but I thought it would nice to paint up a figure of Hanyery, base him as a chief (so on a 2p piece) and have him as the leader of 5 other figures.  Based separately, the extra heft of this figure won't be so noticeable.  Incidentally, while I've admired this painting for years, I hadn't noticed that Troiani has painted Herkimer sitting propped up against a tree directing the battle.  I'm on a bit of an Oriskany roll at the moment, with more Iroquois and the KRRNY (as depicted in the Troiani painting) in the works.  I have a couple of GM militia characters left which I'm now minded to paint as other personalities from Oriskany and the Saratoga campaign more generally. 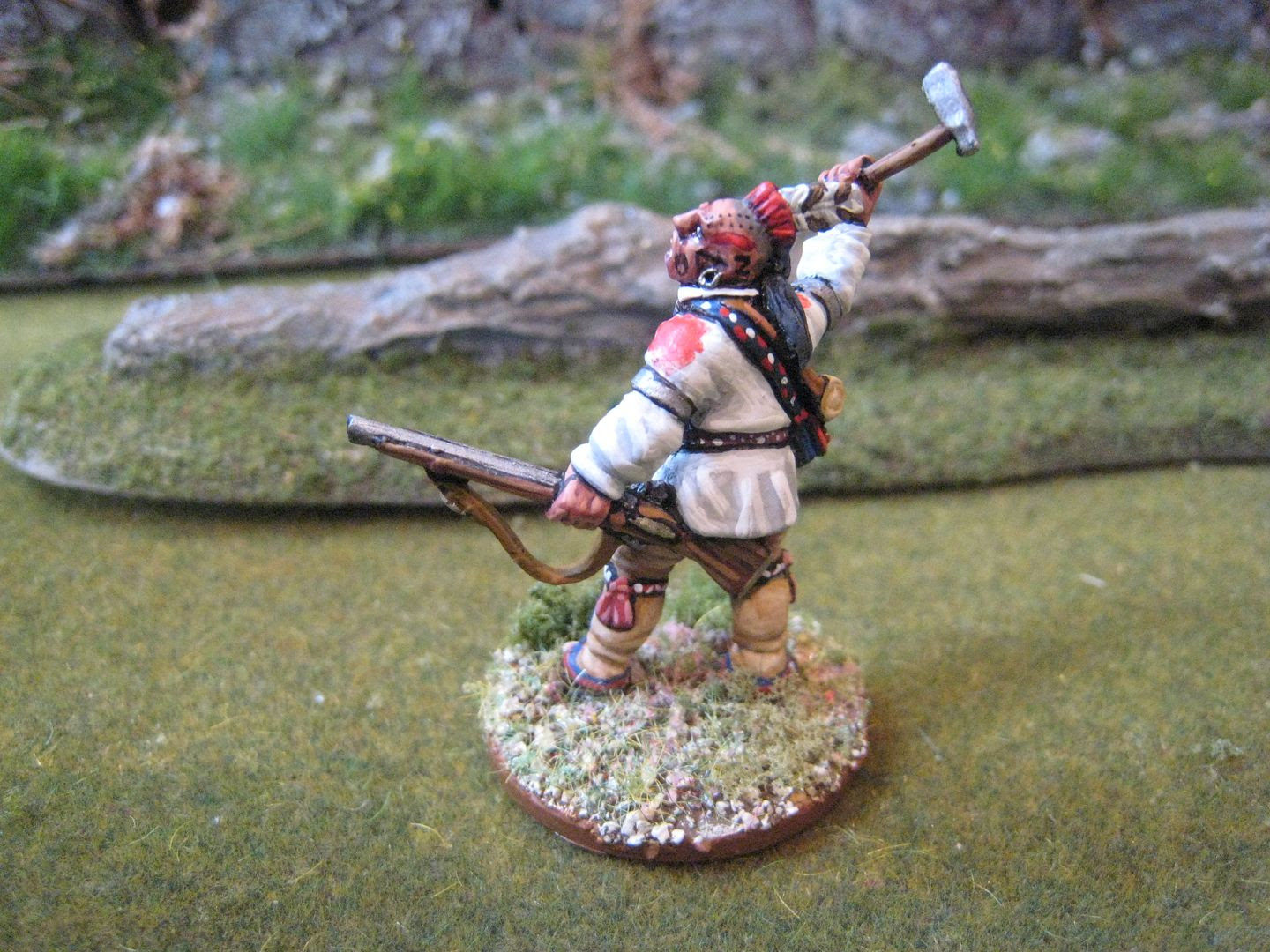 I tried to follow the colour scheme of Hanyery as he appears in the Troiani painting.  The clothing and equipment are not identical, so a bit of improvisation was required, especially on the leggings.  I tried to replicate the facial paint as closely as possible, but I had to leave out some of the detail around the ears.  I'm not sure that the figure in the painting looks like someone in his early fifties, but I suppose Hanyery would have been very fit for his age.  It was only when I finished the figure that I realised the colour scheme is very "red, white and blue".  But I'm pleased with the way the figure came out and I enjoyed reading up about Hanyery and his family for this post.  I'll have to look for a suitable Tyonajanegen now; or perhaps try to hassle Lance at Galloping Major into making one. 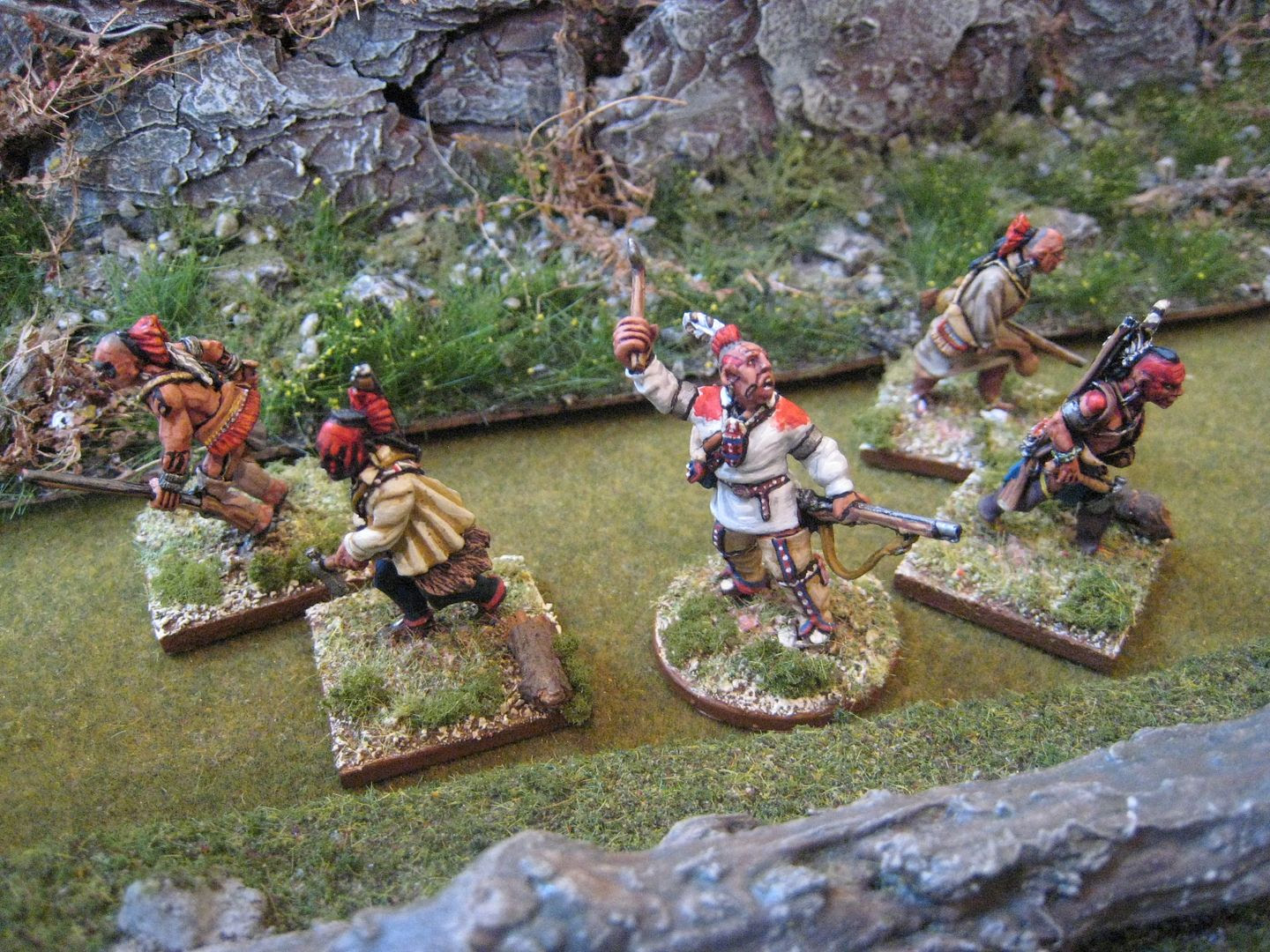 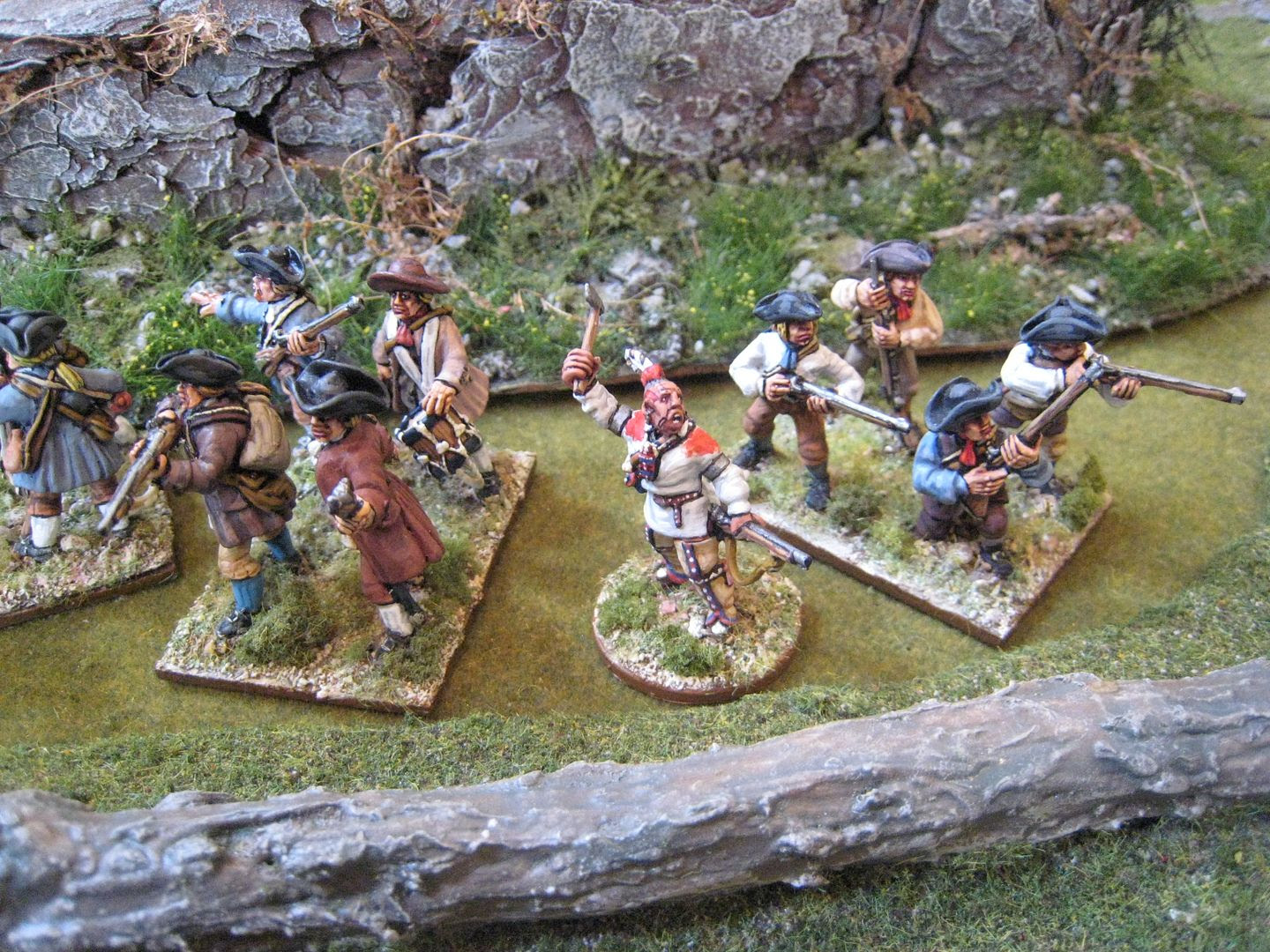 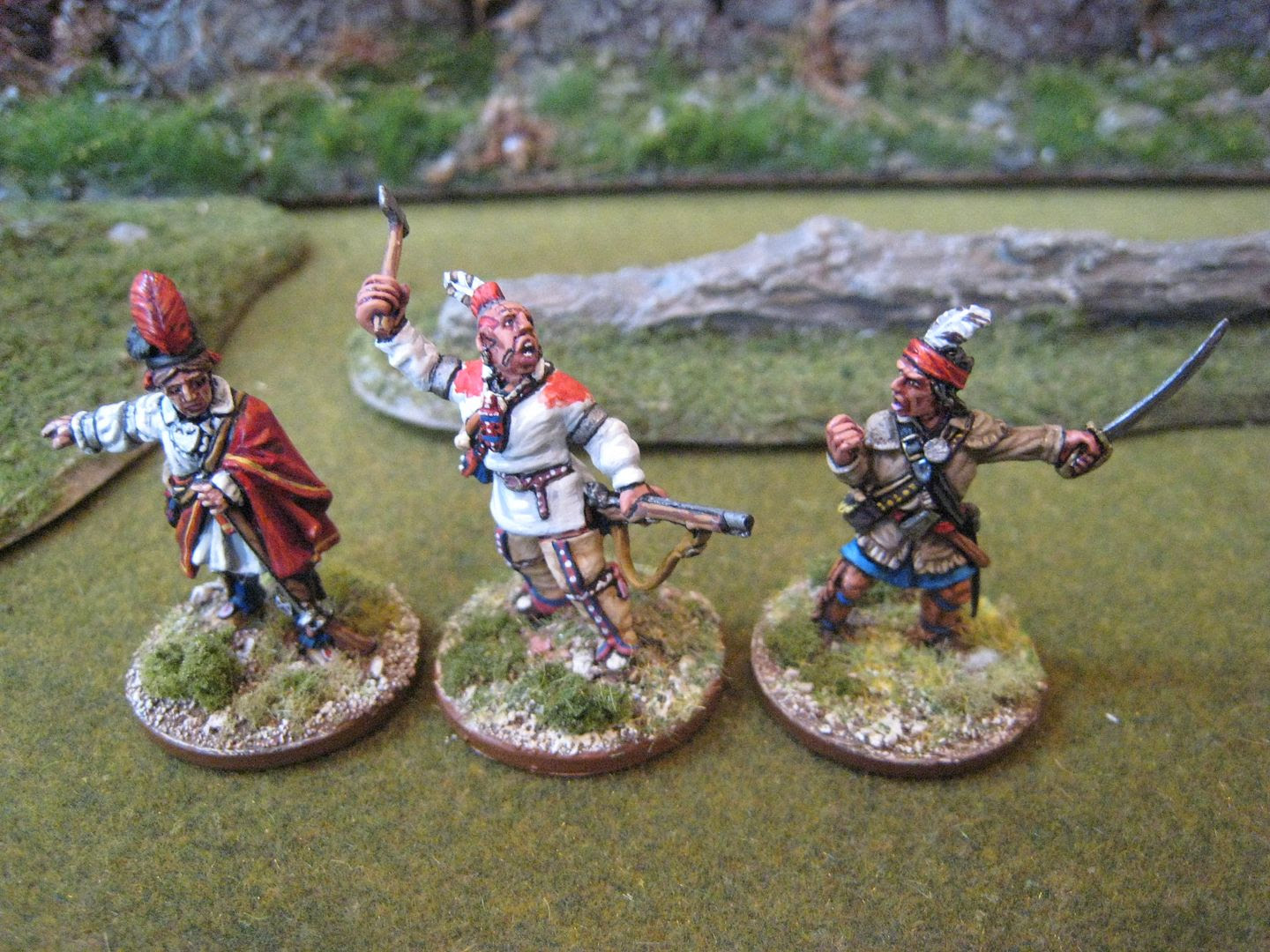 A comparison pic, as a request for such often appears on TMP.  From left to right: Perry, Galloping Major, Conquest.  The Conquest figures are slighter, and the GM ones quite chunky.  But these are fully compatible, in my opinion.

Excellent painting. What's that terrain piece in the background?