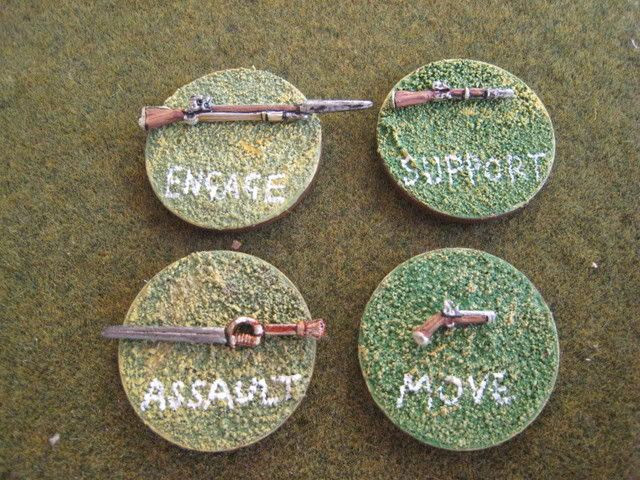 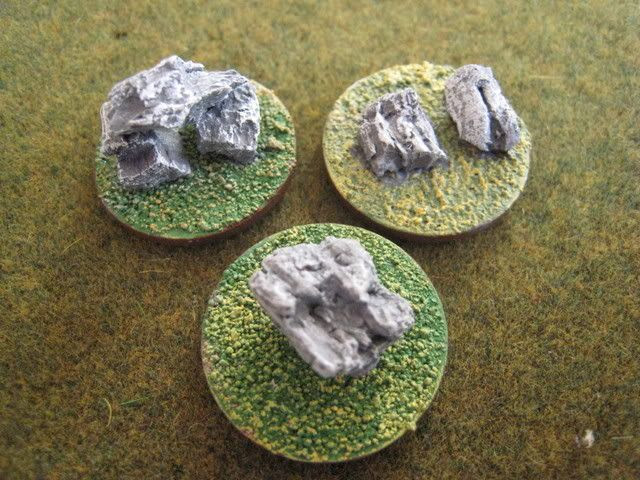 I've received a couple of queries over the past few weeks asking what I use for markers for "British Grenadier!" games. There are two types of marker that are important. First, a means of recording disruption points ("DPs"). DPs are accrued from movement and receiving fire; they represent a unit's disorder before it starts taking casualties. The number of DPs a unit has will be a minus modifier on things like melee, firing and morale scores. Once a unit reaches 3 DPs, it begins to take actual casualties (a unit will never have more than 3DPs at any one time). Secondly, a record of what orders a brigade is on - whether "engage", "assault", "hold" etc. This is important as a brigade's orders will often determine what the constituent units of that brigade must do. For example, if a brigade is on "assault" orders, then at least one unit must advance or charge towards the enemy in each turn; and, generally speaking, only units on "assault" orders can declare a charge. So players need to keep a close eye on what orders their brigades are on and ensure that generals are on hand to change orders as required. Most BG players will have experienced the frustration of trying to change a brigade's orders when your c-in-c is on the other side of the table.

The BG rules come with printed order markers which can be used perfectly well as sold or in a laminated form. I created some more durable markers using two pence pieces and a variety of weapons, as sold by Front Rank. Each order has a designated weapon, such as a sword for "engage", a musket for "assault" and so on. The relevant order is then written in white underneath the painted weapon. I texture and paint the two-penny piece first. The colours for the base are, GW Goblin Green for the base coat, then dry-brushed highlights of Foundry "Ochre B" and "Ochre C" - not my standard base texture colours, but a combination that seemed right at the time. The Front Rank packs of weapons are relatively cheap and there is a decent variety to choose from - carbines, sabres and pistols in addition to muskets and swords. Texturing the base can make the white lettering go a bit wonky from time to time if you're not careful. It's probably most appropriate to attach the marker to the brigade commander figure.

There are various ways you can do DP markers: different numbers of dots on a washer, a casualty figure with different numbes on the sides of the base etc. My method is to build little cairns of stones, using the same method as for the order markers: a lightly textured and painted/dry-brushed base (in the case of DPs, a one pence piece) with small pieces of cork added in ones, twos or threes. I forget the exact paint combination for the cork stones, but I used a GW grey for the base colour and then dry-brushed with a lighter grey and finally white. The bag of cork used came from Modelzone; the cork pieces are in various sizes, so large pieces can be used on 1 DP markers and the smaller pieces combined for 2 or 3 DP markers.

I think these markers look ok. There are pretty unobtrusive, quite simple to make and don't fly around as bits of paper are wont to do. I made dozens of each type of marker a few days before last November's Long Island game, when work required me to stay up all night twiddling my thumbs whilst waiting for various things to happen.... 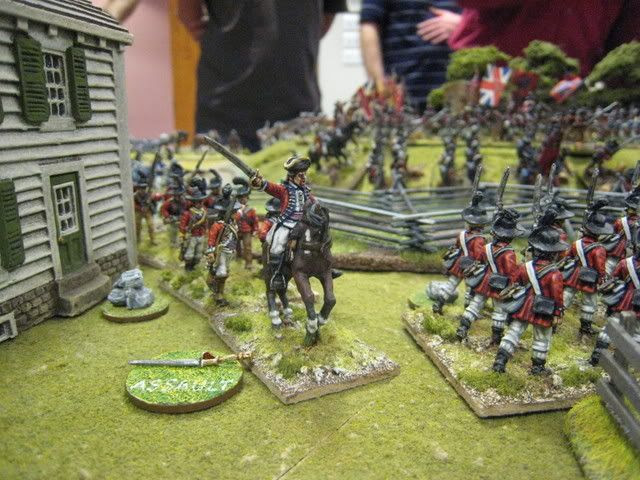 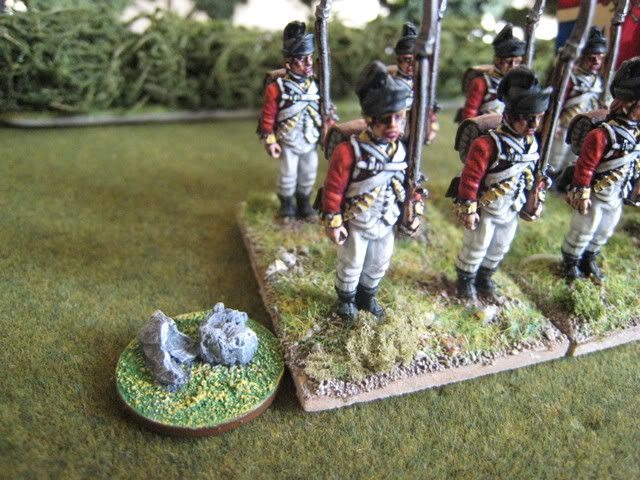 Very neat & tidy. With my dice rolling ability I only need to make rout markers!

Nice markers Giles. I'm in the process of putting some together for myself at the moment as 7th Feb will finally see my first game of BG down at the local club and I just can't face the prospect of using plastic counters! I'm going to do the same for DP markers as you and had thought of doing nice order markers so that gives me an idea.

What do you do for casualty markers pre-removal of a full base? Do you use a roster instead? I have some casualty figures coming next week so thought of using them with the relevant 1,2,3 stones etc. on different sides to mark the number so far.

It'll be interesting to see what other comments you get here.

For ages I've used red and yellow map pins to mark "rout" and "shaken" morale status for the rules I use... I do like your idea of the rocks though and may have to change my approach!

I like those markers..I play ECW using Victory Without Quarter and those "rock casualty" markers would work well..I'm off the the yard to collect stones!

Dave, for stones, get some cork board with the coarse cork and break it up. Paint it flat black and dry-brush it for color. It's lighter, holds paint better and looks great.

Neat looking markers you've created there! Funny how very simple things like that can add to/help move a game along. I might have to have a go at whipping up some similar items. Thanks for the idea.