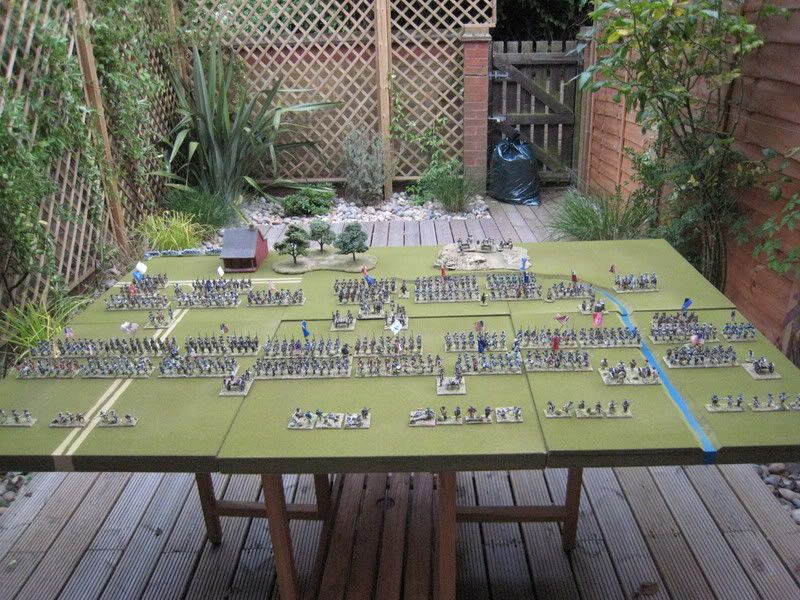 It's a couple of weeks overdue, but then I spent the real 4th July 2008 lurching from one winery to the next in Marlborough. Last Sunday was the first day I've really had to myself since I returned from New Zealand. I have been meaning to parade the boys for a while now, and a couple of queries both here and elsewhere about the size of my collection and some lovely summer sunshine prompted me to let Mr Washington (as the British often insisted on calling him) inspect his troops. So here is the American half of my AWI collection. In total I have 37 regiments of infantry (including skirmish units), 1 of cavalry and 12 gun crews. Not all of these are on the table, but most are (missing are the 11th Virginia, which was in the wrong box, some skirmishers, Indians and extras such as artillery baggage, dragrope men etc).

This was a useful exercise for several reasons. First, I need more brigade commanders; that is easily solved as I have a pack of Old Glory generals that is waiting to be painted. Second, hunting shirts are still relatively scarce, and you can see that the majority of regiments are in uniform coats. Third, I probably have too many regiments. I haven't worked out as yet what one would need to do something like Brandywine entirely from one's own resources, but the reality is that many of these figures, particularly the older ones, will rarely see a game unless I make more of a conscious effort in that area. But I suppose that is the lot of many 18th century collections, which will contain several regiments that don't feature in orbats that often. Fourth, the older figures really pale beside my more recent units; I can see now why gamers "retire" their less well-painted stuff.

Anyway, I will let the pictures do the talking and not bother with captions. This, together with its British/Hessian counterpart, is the product of 5 years of collecting and painting AWI. The sum total doesn't seem all that much in Napoleonic terms...Everything is based for the "British Grenadier!" rules, hence filing this post under the rules' label. 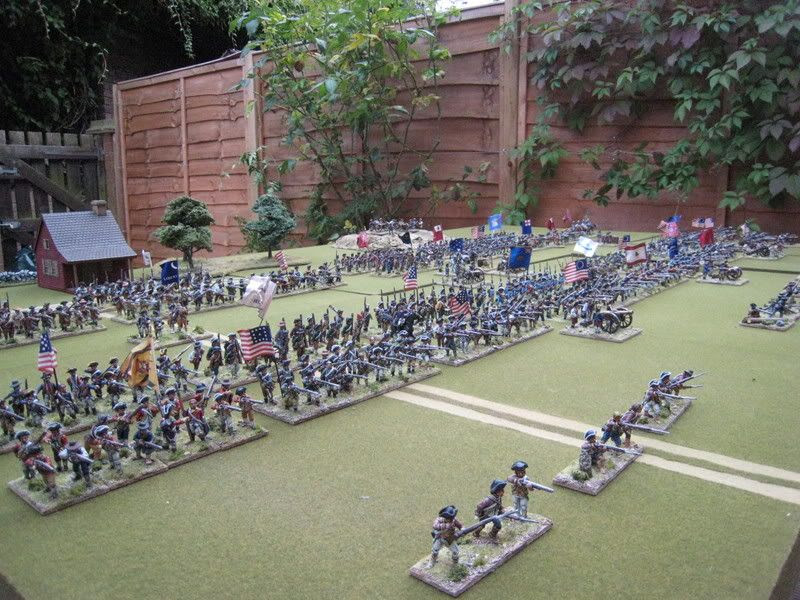 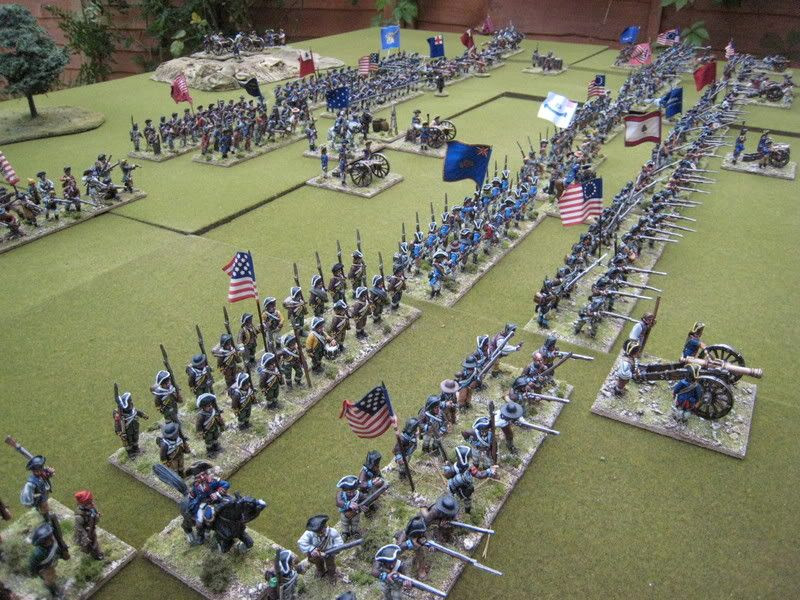 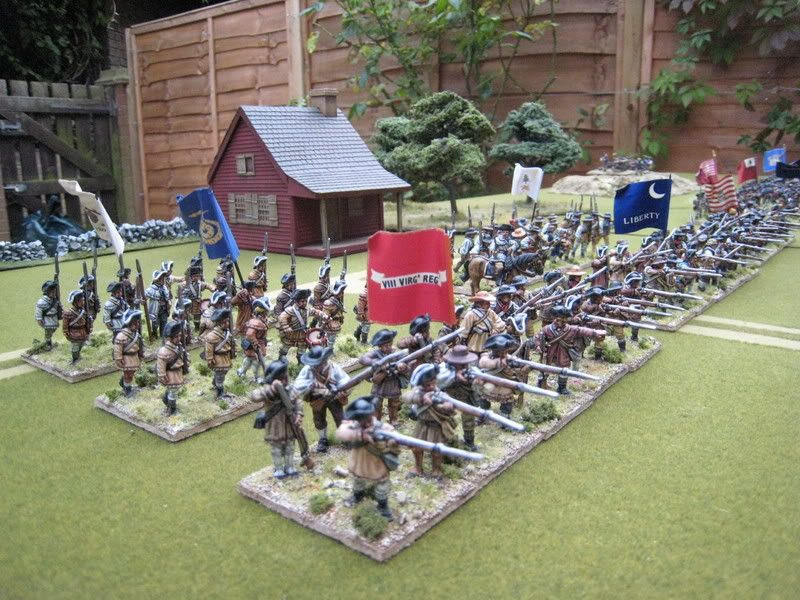 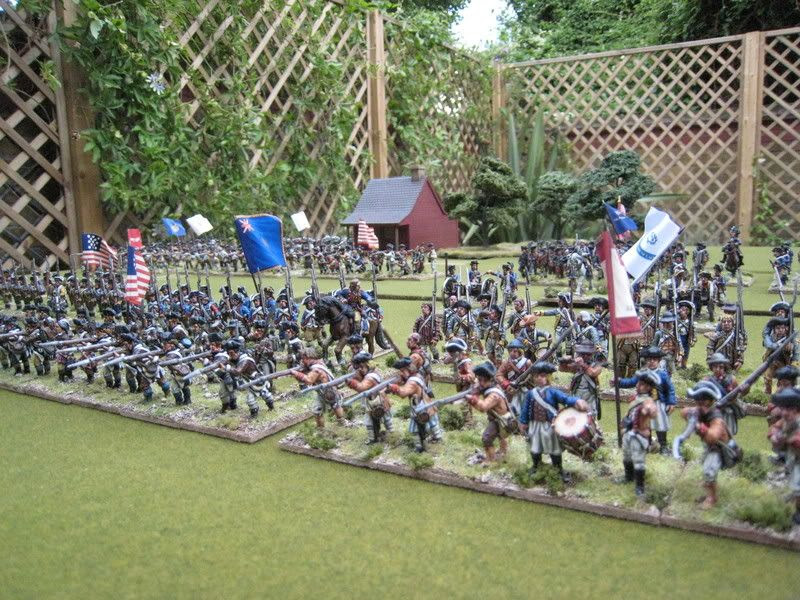 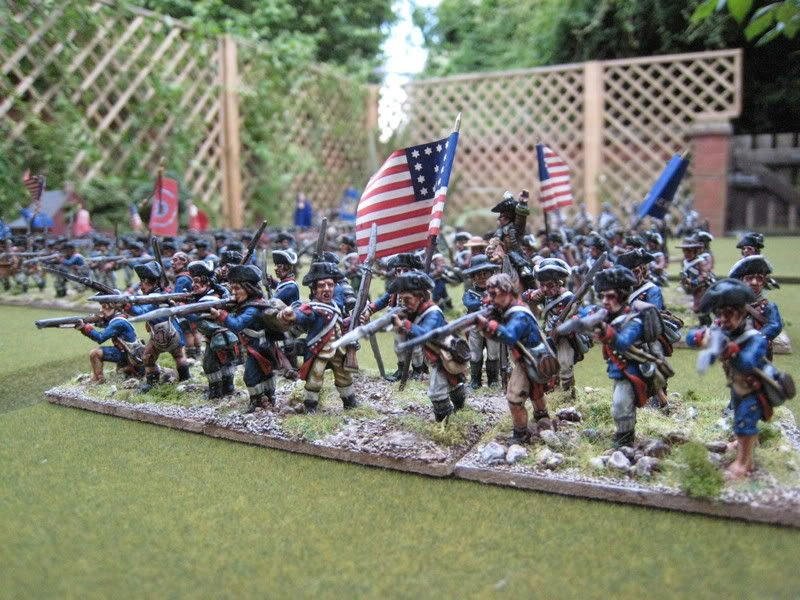 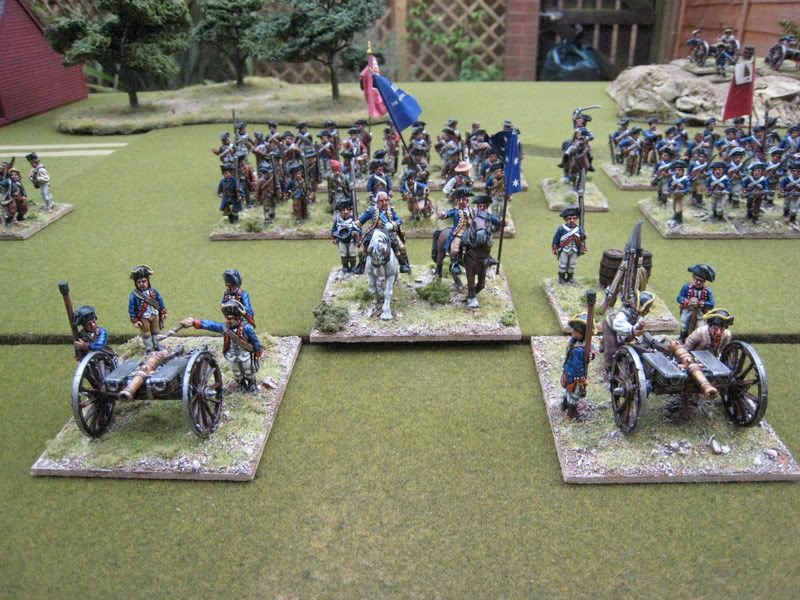 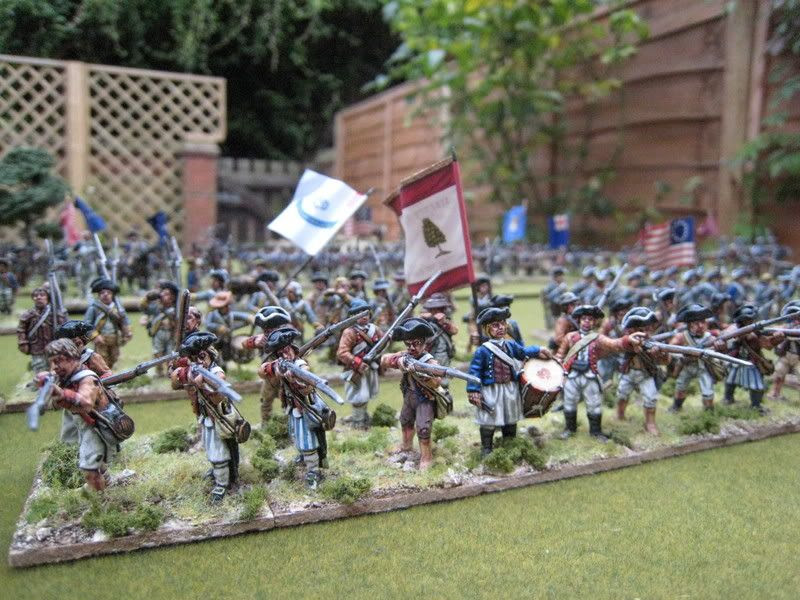 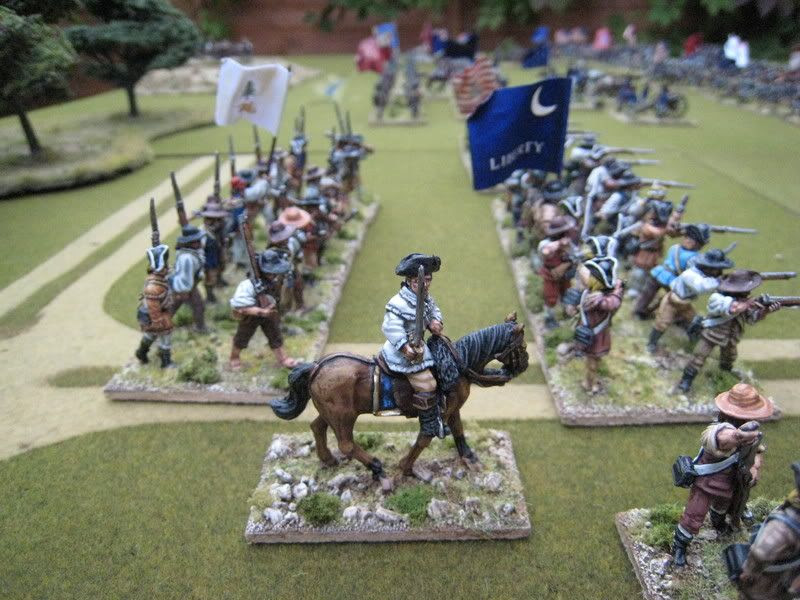 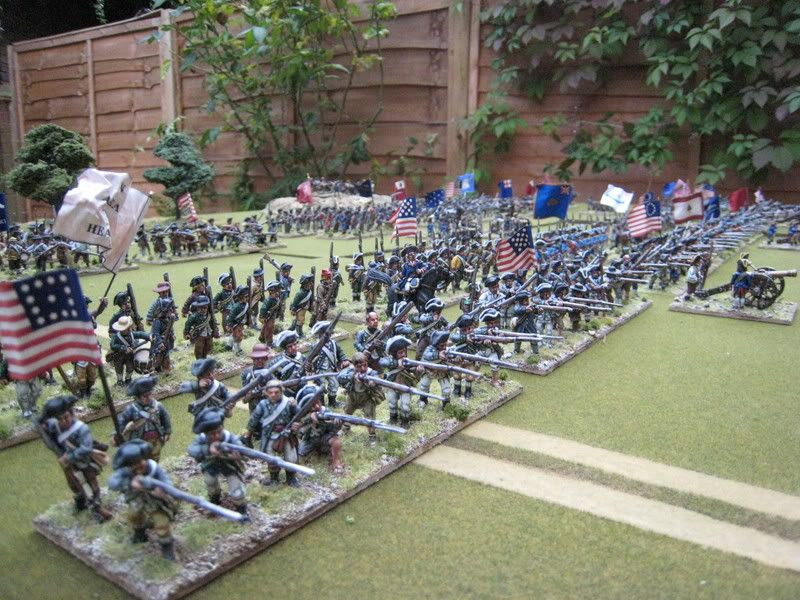 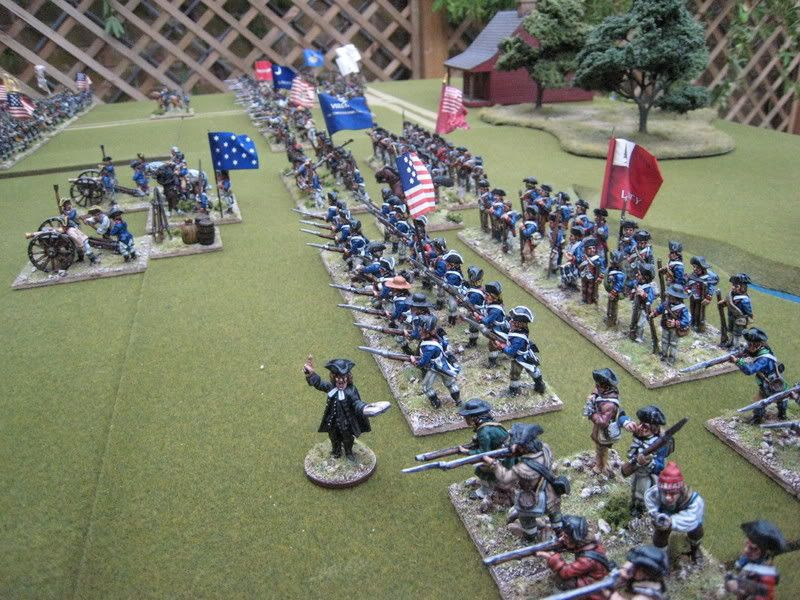 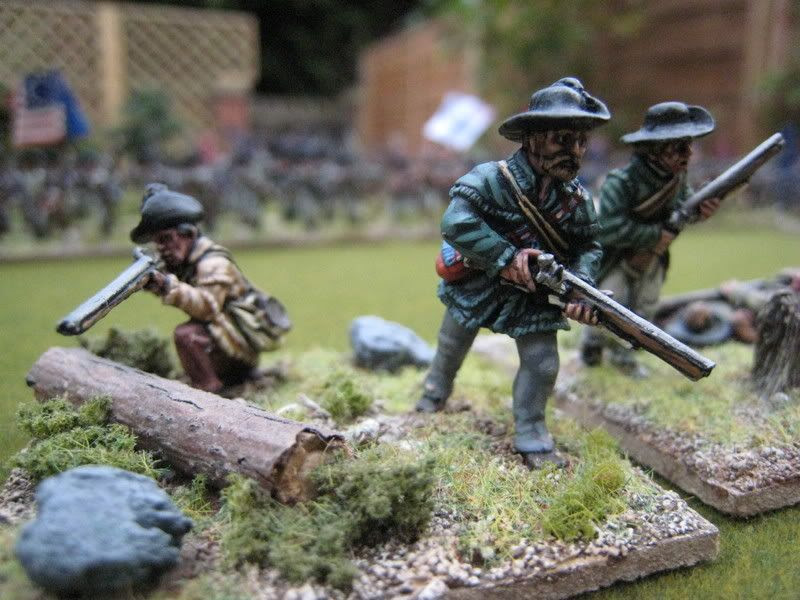 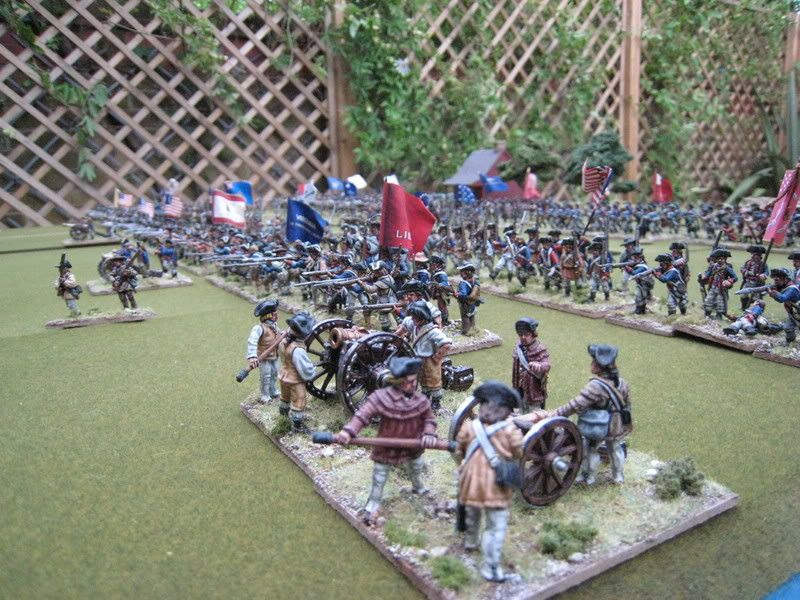 Re. the older units and units you don't think your going to use, use them anyway in your own scenario's - there are always a shed load of "what if" scenario's in any campaign, and it's a shame not to see them march at least once!

Just beautiful, Giles. I am massively jealous:) Listen, if you really want your older guys to retire to a nice home, I can offer some space at my place?

Seriously, just great. Would love to see a game with all of them!

Mr Washington would be proud to parade before such a force.

Whether he commanded such a large force at one time or other is of no consequence.

One thing to keep in mind when planning out units for battles, keep in mind that you can also set upon entire campaigns. Some of which included units that did not make it to the 'actual' historical battlefields, yet were 'potentially' available all the same.

Alternately you can also keep the 'retired' troops as 'markers' to denote the locations of larger formations (and special commands) on 'campaign maps' used to control the movement of whole armies, corps, division, brigades, regiments, and battalions.

I never have plans to retire my troops, mind you though I may decide to 'have at' with matchstck cannon some day though...

Fire at Will said...

Great to see the collection out for review, an inspiring sight. I must get around to doing the same sometime this summer, though a lot of my older plastics need some touching up, but they've seen a lot of service over the years.

Excellent to see it all on the table mate, looking forward to the British collection also.

Holy cow! That's what I call a Wargames Army! What it is to be able to concentrate on one period!

That is an army to make anyone envious. Well done and thanks for the pics.

What a fabulous collection

Looking forward to the british parade.

I'm actually working on my AWI army again and hopefully will have some more posts soon about it on my Blog.

Very inspiring Giles!! You're killing me with those stars and stripes though! LOL!

Can't wait to see the British half!

Simply splendid! How about a King's Birthday parade for 2009? Maybe with a feu de joie and a loyal toast as described by John Peebles!

Absolutely fantastic!Your blog is a huge inspiration for me.

Are you paying more than $5 per pack of cigarettes? I'm buying my cigarettes over at Duty Free Depot and I'm saving over 50% on cigarettes.