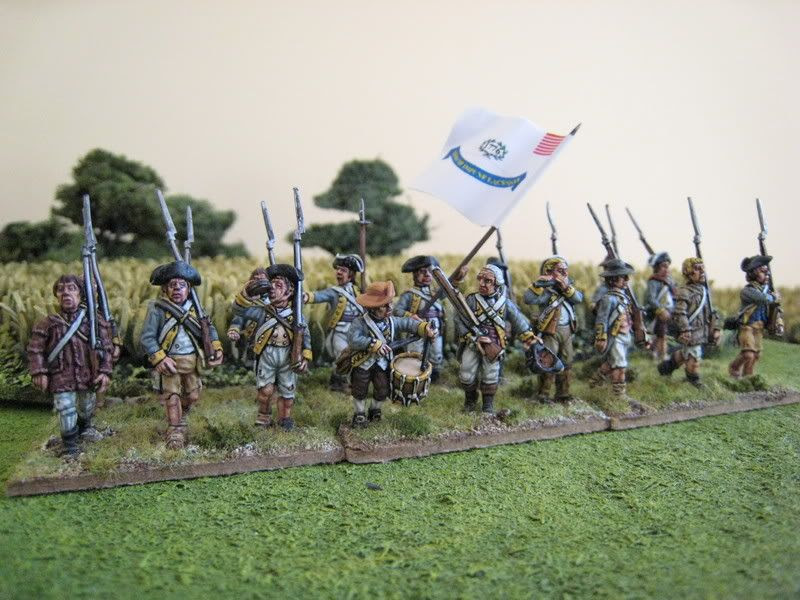 Finished at last, here are pics of my latest regiment, which I have designated the 10th Virginia Regiment. I suppose there are essentially two ways of modelling American regiments. First, you can paint them up in common, generic colours (e.g. coats that are blue faced red or brown faced red, or hunting shirts, or a combination of shirts and coats) and use them for whatever regiments you like. Secondly, you can research to see what uniform a particular regiment might have worn at any one time and paint it up accordingly. I have used the Brandywine order of battle at a focus for my Americans and generally follow the second method. Researching uniforms is quite fun and I'm keen to ensure that my American regiments do not all look the same - often you come across a particularly colourful uniform which looks good on the tabletop (such as Webb's Additional's scarlet faced yellow coats) and breaks up the mass of dark blue and brown. So when painting I give names to my American units and try to model them according to whatever uniform records are available, even though when it comes to games I just put whatever is to hand on the table and don't worry if the "1st Maryland" is standing in for the "4th Virginia". Something else I like to do is to see what interesting flags are commercially available and then paint up the units that go with them.
In the case of this unit, I came across an illustration in Mollo of a private in a grey coat with yellow facings. The caption simply states that the figure is taken from a von Germann drawing. I liked this combination of colours and so looked around to see if there was a regiment I could use for it. The Brandywine orbat has the 10th and 14th Virginia Regiments combined together in an 18-figure unit in Weedon's 2nd Virginia Brigade (in Greene's/Knyphausen's sector of the battle). That met my purposes because I wanted another 18-figure unit and the rather "Johny Reb" look of the grey and yellow coats seemed suitable for a Virginia regiment, given that I couldn't find much information about what uniforms the 10th or 14th might have worn.
I needed a flag, but didn't feel like yet another stars and bars or whatever, so looked at what was in my flag box. A couple of years ago I bought a load of flags from "Flags for the Lads", who produce things like the Gosteloe flags that GMB as yet don't make. I found a flag that is attributed to the "Richmond Rifle Rangers". After a bit of research it seems that little to nothing is known about this unit (a couple of people on TMP thought it might be a post-AWI regiment). Given that Richmond is in Virginia, this flag seemed suitable for my fictitious 10th. So instead of yet another regiment in blue with a Betsy Ross flag, I have something that looks a bit different. (I should add that GMB now also make this flag.)
The figures are mainly from the Eureka "ragged Continentals" range. Strangely, Eureka make a standing officer and drummer to go with their firing line figures but don't produce a marching officer or drummer. For those I used Foundry figures: the drummer is from one of the Foundry Continental command packs and the officer is actually a British regular (but since he's not wearing any button-hole lace it doesn't matter and, in fact, the same figure but with a head-swop appears in the Continental pack). I've found that the faces on these Eureka figures require slightly different handling to Perry/Foundry faces; Eureka have quite pronounced eye-lids which make painting eyes much harder. I'm also not entirely sure what the chap with his right arm outstretched is supposed to be doing - I thought perhaps asking for his water bottle back, but he has one slung over his shoulder. Another point is that the pointing "sergeant" in the second rank shouldn't be carrying a spontoon: only officers carried these. Anyway, I love these figures; they paint up well and really look the part.
The cornfields are newly acquired items from Touching History - very effective and an extremely worthwhile purchase. I have heard people say "it's just astro-tuft; go and make them yourself". Even if I had the time and inclination to have a go at making these (which I don't), I'm sure my efforts wouldn't be half as good as these ones. The inner sections can be lifted out and the ground underneath is fully roughed-up and painted accordingly - I shall post pics of this when I finish my farm hands and field workers, next up on the painting production line. £50 (or thereabouts) bought me enough fields to cover almost an entire 2 foot square TSS tile, so if you fancy some drop Paul Darnell an email and treat yourself.
18 figures. Painted July/August 2007. Flag from "Flags for the Lads". 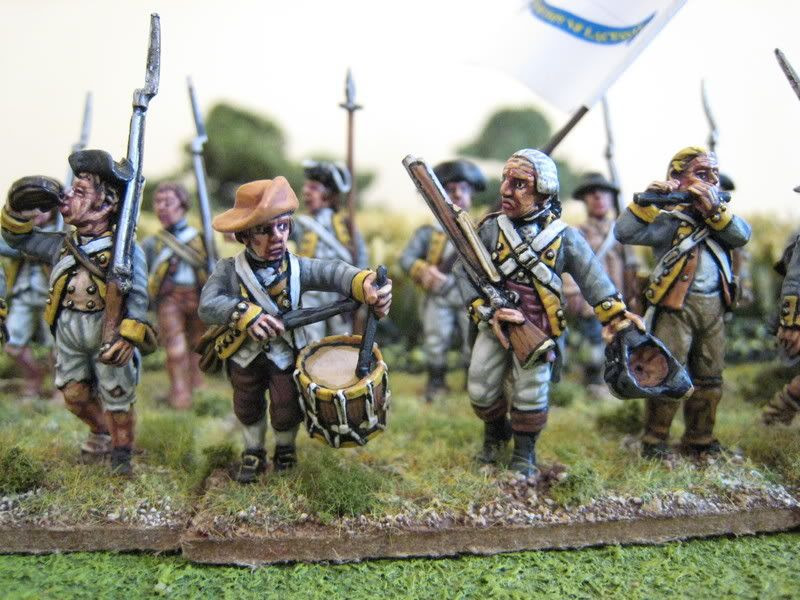 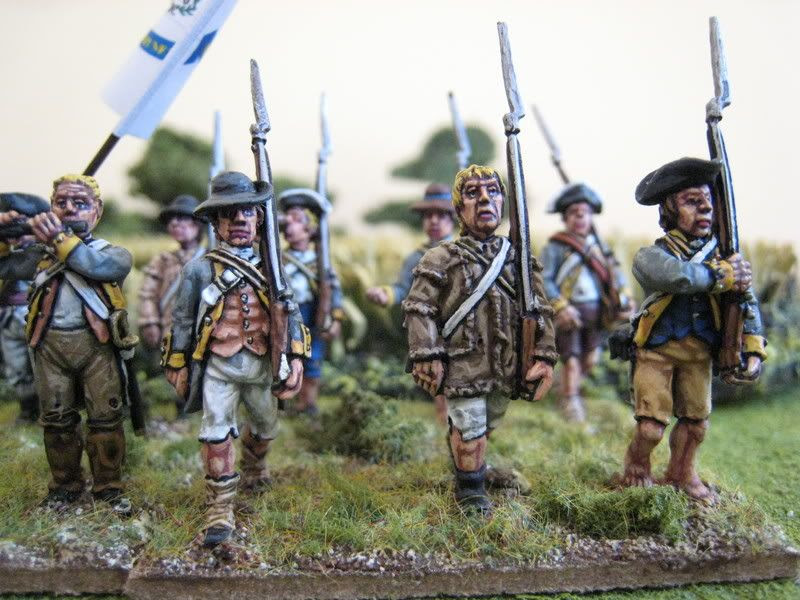 Very nice unit Giles, I really enjoyed reading the decisions you made in modeling it. Since you last mentioned Eureka on the BG forum I've been toying with an order, but had not yet seen how their "raggeds" looked painted. These boys solved that problem and Eureka will be serving within my ranks of Continentals.

Nicely done Giles. I think you improve with each unit and I rate this as your best to date. Full of character and the consistent level of painting makes it almost impossible to distinguish between the Foundry and Eureka figures.

Wonderful job, with great choice of colors. I wish I had these fellows in my army....Bill

Very nice figures indeed, I was wondering what the Eureka range were like in the flesh so to speak Mr Eureka himself was trying to flog me some when I was down south for the Claymore show.
As for flags I use Vaubanner from Canada, then 'tart them up'. An excellent range of true 28mm flags
http://www.mts.net/~homenic1/vaubanner/vaubandex.html

Outstanding. I also try my best to make specific units, although I do have a selection of 'generic continentals' to pull from when needed.

Again, very inspiring stuff Giles! Your output is prodigious & yet the quality is also top notch. I always check your blog for updates & am chuffed that, unlike many blogs, its always kept fresh.

nigel b said..... fantastic stuff, i just got a load of cheap foundry continentals but no command boxes guess i'll look at Euraka so swell the ranks. fantastic paint job